Skip to main content
Why is Performance Testing Required in DevOps Processes?
August 12, 2021

In the traditional process of software development, designers pass on their designs to developers who do all the coding as per the client or business requirements. Thereafter, testers get into the picture to conduct functional and non-functional testing and release the code to the operations team. Any issues raised in any part of the lifecycle are passed to the developers before the cycle repeats itself. Needless to say, this process takes an unusually long time and is an anachronism in today's fast-paced software development cycle.

DevOps takes a drastic departure from the status quo by combining processes, tools, and practices to accelerate the application's time to market while upholding its quality. DevOps helps remove barriers that prevent organizations from developing, testing, delivering, and updating applications or systems quickly. Its focus on continuous integration and delivery reduces the SDLC to a minimum. 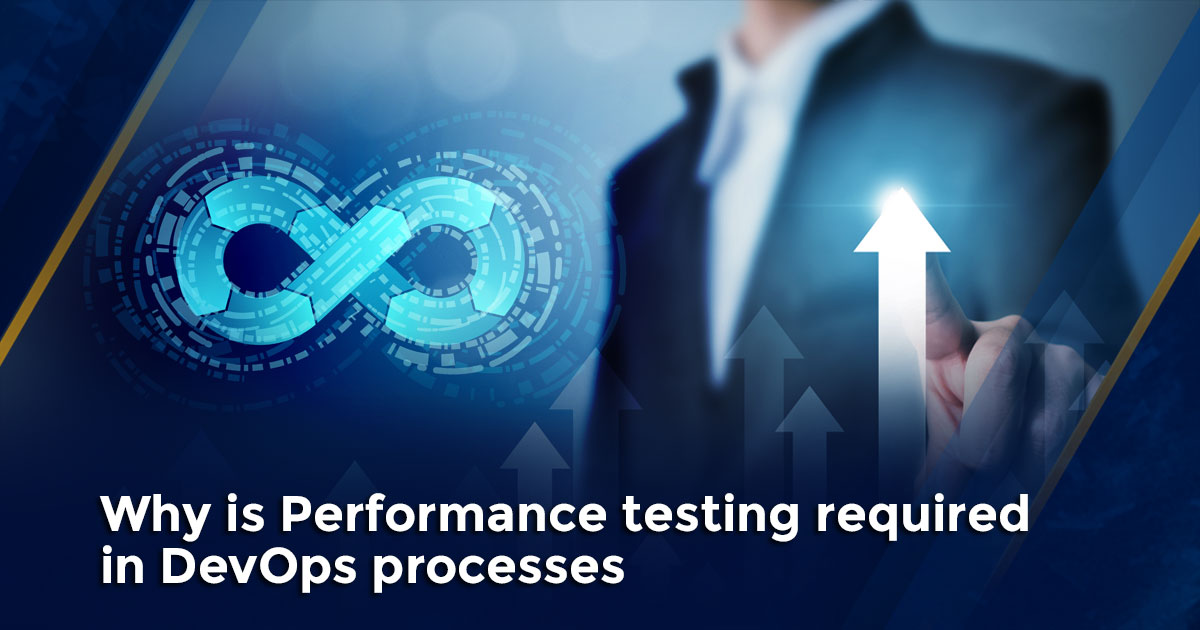 The objective of DevOps implementation is to create an automated pipeline to deploy and update software applications. Since it requires the seamless collaboration and performance of all departments and stakeholders to achieve a common goal, it needs to take everyone on board. However, collaboration among departments is not limited to merely sharing tools or processes, but making a cultural shift.

To derive maximum benefit from a DevOps approach, a continuous testing strategy should be implemented throughout the SDLC. Although functional testing entails checking the code for errors and providing quick feedback to developers when needed, there is a need to ensure better performance of applications to deliver superior user experiences. This calls for implementing DevOps performance testing.

Even as faster time to market for software applications has become important, the performance of such applications is the ultimate key to success. It answers the question of how to ensure the code released will perform as per the business requirements. With the DevOps methodology, various teams combine processes, tools, and practices to deliver change seamlessly and without any performance risk. In simple terms, continuous delivery needs continuous performance. The other reasons why DevOps performance testing is critical to the success of the application are:

■ Since many enterprises are migrating their applications to public cloud platforms such as Azure, Google Cloud, or AWS, any changes to the moving parts of such platforms, namely, virtual machines, load balancers, and others, may impact the performance of applications. Thus, it is important to monitor the performance of such applications, especially when they are hosted in a cloud environment.

■ Many applications implement A/B testing or other experiments to increase conversions. So, when business teams launch such experiments without involving the IT team, they can influence the applications' performance adversely.

The CI/CD process in DevOps needs to be monitored for performance to achieve the following benefits:

■ The quick feedback given to developers about any performance-related issues can ensure the removal of bottlenecks in the code at the early stage of the SDLC. The cost of fixing bugs during the early stages of development is cheaper than doing the same during production.

■ When performance test metrics are checked against baselines, they can help identify latency issues, performance degradations, and other errors.

A key factor influencing the success of software applications in the market, especially in the e-commerce and BFSI domains, is scalability. What happens if the application cannot handle an increase in user traffic and shows performance issues such as latency or downtime? For any existing continuous testing framework, DevOps performance testing should be integrated to ensure the application performs as expected before moving a build to the next stage.

DevOps Institute will host SKILup Festival in Singapore on November 15, 2022.

The Apptainer community announced version 1.1.0 of the popular container system for secure, high-performance computing (HPC). Improvements in the new version provide a smaller attack surface for production deployments while offering features that improve and simplify the user experience.

ActiveState announced the availability of the ActiveState Artifact Repository.

Split Software announced the availability of its Feature Data Platform in the Microsoft Azure Marketplace.

Katalon announced the launch of the Katalon Platform, a modern and comprehensive software quality management platform that enables teams of any size to easily and efficiently test, launch, and optimize apps, products, and software.

mabl announced its availability as a private listing on Google Cloud Marketplace.

Zesty announced a $75 million Series B funding round led by B Capital and Series A investor Sapphire Ventures.

Database DevOps - Building Better Systems
Database DevOps - Imagining Better Systems
What DevOps Professionals Need to Know About SAP
A Beginner's Guide to Agile Development for SAP
A Step-by-Step Guide to CI/CD Workflows in SAP
What is DevOps for SAP (and how can it help)?
AWS DevSecOps Bootcamp: Automate Cloud Security with Terraform and Bridgecrew
Exploring an Integrated DevOps Workflow in SAP
How to Get Started with DevOps for SAP - a 10-Step Guide
END_OF_DOCUMENT_TOKEN_TO_BE_REPLACED

The Importance of Continuous Deployment
10 Pillars of Pragmatic Kubernetes Deployments
State of Open Source Security Report 2022
Conquer SaaS Chaos with a SaaS DevOps Platform
Buyers Guide to Workload Protection
Protecting the SDLC
Join the 80% – DevOps for SAP: Laying the Foundations for Success
Streamlining Software Development with SAP Toolchain Integration
How to Get Started with DevOps for SAP
A Practical Guide to DevOps for SAP
Best Practices for GitHub
Buyers Guide for CNAPP
DevSecGuide to Kubernetes
Buyers Guide for DevSecOps
END_OF_DOCUMENT_TOKEN_TO_BE_REPLACED