Skip to main content
Why Every Company Should Invest in Alpha and Beta Testing
March 25, 2020

The software testing industry is known for its jargon — from black-box testing and defects to mutation testing and Gherkin. But two important terms in the software delivery lifecycle are alpha testing and beta testing. Beta testing is the best-known, even for those with a less-technical background. Major brands like Apple and Google have made this term popular, by running large-scale beta test programs to give users a sneak peek at their new products. But, for most companies, why take the risk of releasing a product in beta, revealing the latest features to their direct competition? The answer is because you need to be sure you are releasing software that is actually useful and usable.

The Need for Acceptance Testing

In most stages of the software testing cycle, QA test engineers perform functional tests to eliminate bugs and defects, ready for release. This ensures the software doesn't crash and the UI behaves as expected. But, in order to verify the software delivers a positive experience, developers turn to two types of acceptance testing: alpha and beta testing.

With any form of acceptance testing, the product team knows exactly how the software should operate and work alongside the QA team to advise what needs to be checked and verified during alpha testing. Up to this point, artificial test data is used to run tests, but the product team can provide real test data for each unique user journey, providing a more holistic view of how the product will operate.

Alpha testing is the first time teams can evaluate what the software does rather than how the software behaves. To put this into perspective, consider the steps it takes to build a car. The engine, steering, brakes, and chassis are all thoroughly tested in isolation. But then you need to build a production prototype and put it on the test track. Similar to an alpha test, the car is inspected inside and out and thoroughly tested before it hits the open road.

Beta testing happens after alpha testing is complete. Beta testing allows companies to expose their software to real users when teams are confident the product or software is ready to be released at full scale. Beta testing is usually done with a small, select group of users. The goal is to see how the software performs in the real world, using real users, with real data. Beta testing allows product teams to evaluate if features are being used as expected and flush out any stability issues that might have an impact on the backend. They can also compare different UI experiences through A/B tests. In relation to the car example above, this would be comparable to testing the prototype car on the open road.

To receive honest results and feedback from a beta test, you need to recruit users who are familiar with the product or with similar technology. Knowing they are testing a product or feature in beta, these users will likely be more forgiving to any mishaps or issues, especially as they are getting a taster of upcoming features not yet available to other customers.

Beta testing can be even more beneficial when your team instruments the UI and backend properly, and monitors exactly what the beta testers are seeing in the software. Importantly, monitoring allows teams to gather data and any crash logs should users trigger a fault or unknown bug. Teams also gather explicit feedback from beta testers, critical for understanding usability and which new features are more popular.

While alpha and beta testing have their similarities, there are distinct differences. 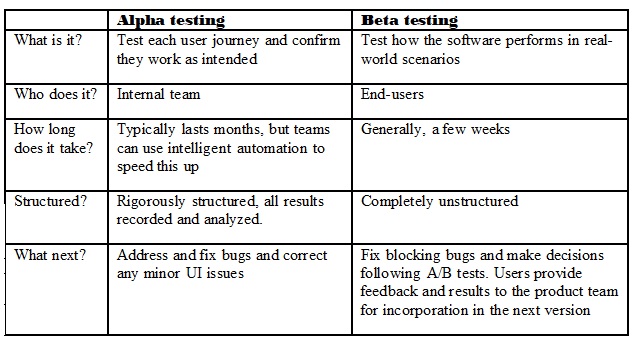 There are two other approaches to consider that generate additional benefits — canary testing and dark launching. Canary testing involves exposing a small group of users to your new software without their explicit knowledge or consent. The goal of canary testing is to compare these users against everyone else. In dark launching, new features are released but not activated. The goal is to ensure the software is still stable and to allow these features to be turned on and off via feature flags.

For some companies, it doesn't stop there. Gmail, for example, was in beta for five years. This approach of long-running betas that are available to anyone are allows companies to avoid potential litigation or negative press that may arise from any bugs. Plus it gives companies the right to change or update the software whenever necessary.

Together, alpha and beta testing ensure software is stable, works at scale, and performs as designed and as users expected. Companies that avoid acceptance testing risk delivering negative customer experiences. But if companies invest in intelligent test tools that leverage machine learning to assist in the creation, running, and analysis of their tests, they can accelerate their product roadmap, giving them a competitive edge and providing the ultimate customer experience.

Jon Seaton is Director of Data Science at Functionize

No Code Orchestration of Octopus Deployments
All About Container Security
Introducing ActiveControl 9.0: 4 Principles for Removing Bottlenecks from SAP Change Delivery to Drive Business Growth
GitHub Actions and Octopus Deploy
DevOps Transformation Using No-Code Orchestration
CI/CD with GitHub Actions and Octopus Deploy
Automate Salesforce Releases: Live Panel with Nokia
Getting Started with Octopus Deploy
Rebuilding and Scaling Up Your SaaS Product
Database DevOps - Building Better Systems
Database DevOps - Imagining Better Systems
What DevOps Professionals Need to Know About SAP
A Beginner's Guide to Agile Development for SAP
A Step-by-Step Guide to CI/CD Workflows in SAP
What is DevOps for SAP (and how can it help)?
END_OF_DOCUMENT_TOKEN_TO_BE_REPLACED

Security at the Speed of Development
Accelerate Your Kubernetes Deployments
How to Map Your Deployment Pipeline
CI/CD Best Practices for Stress Free Software Development
The Importance of Continuous Deployment
10 Pillars of Pragmatic Kubernetes Deployments
State of Open Source Security Report 2022
Conquer SaaS Chaos with a SaaS DevOps Platform
Buyers Guide to Workload Protection
Protecting the SDLC
Join the 80% – DevOps for SAP: Laying the Foundations for Success
Streamlining Software Development with SAP Toolchain Integration
How to Get Started with DevOps for SAP
A Practical Guide to DevOps for SAP
Best Practices for GitHub
END_OF_DOCUMENT_TOKEN_TO_BE_REPLACED