Working with microservices and Kubernetes often means solving the same solved problems over and over, without having the time to focus on what really brings value to the business. Instead of shipping new features, hours are spent wrangling dev environments, or waiting to get feedback from slow tests, or troubleshooting CI. It can be really frustrating. And it's a common complaint I hear from other developers and DevOps engineers.

Garden recently commissioned research to gather insights from software professionals around the world, and specifically to find out where time is being spent, what tasks often cause frustration, and how this time could be better spent. Vanson Bourne surveyed 400 developers and DevOps team members of varied levels in the US, UK, and Germany, from January-February 2021.

Some of what we learned reinforced my own experiences but there were some other surprising insights. And when we set out to quantify the impact of time spent on "solved problems" that respondents shared with us, the data was truly eye popping.

Respondents spend, on average, more than 15 hours every week on tasks outside of writing application code — from maintaining internal tooling, to setting up dev environments, to debugging pipelines, to waiting for builds and test results.

This is in stark contrast to the 4.5 hours spent by developers actually writing code. Let that sink in for a bit.

In the US alone, we calculated this time spent could be costing companies up to $61 billion per year, based on median pay and number of software developer jobs in 2019, as reported by the US Bureau of Labor Statistics.

Despite the promise of DevOps to enable greater focus and productivity for organizations, respondents at all levels and across departments are spending more than a working day and a half every week on work outside of writing code. 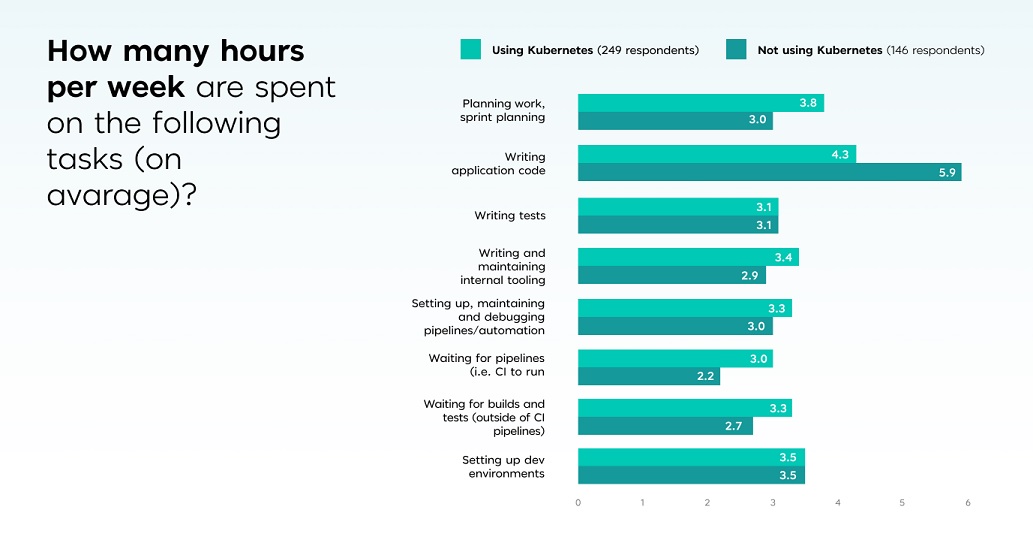 We asked respondents to rank the top 3 things that cause them the most frustration at their job.

55% of respondents identified difficult communication between teams and functional groups, closely followed by 54% with slow feedback loops during the development process. Lack of flexibility in choosing tools came in third at 49%.

"Slow feedback loops during the development process" was the frustration that was most frequently ranked #1, with 20% of respondents ranking it as their top frustration. It makes sense, considering the sheer number of hours respondents spend setting up and waiting for pipelines, waiting for builds and tests, and setting up development environments.

A clear majority of respondents acknowledge they're not spending their time as effectively as they could. In fact, more than 75% of respondents say the time they spend on specific tasks is time wasted, suggesting it could be put to more strategic use.

Seven in 10 respondents say the time they spend on specific tasks is time wasted, and they would rather spend time on tasks that directly support the company's bottom line:

■ 44% say they would improve security for existing products and services

And this doesn't even take into consideration the opportunity cost of keeping developers from higher-value work. Imagine the potential if every software developer could reclaim an extra day every week.

Funding the Future of DevOps

It's clear we still have a long way to go before we reach DevOps nirvana, that magical place where developers no longer waste hours every week on low-value work and development workflows are free of frustration.

The good news is that a majority of respondent organizations plan to budget more toward DevOps and tooling and increase headcount in 2021 compared to 2020. And organizations that are using Kubernetes are substantially more likely to be increasing budgets (79% vs. 69%) and growing their teams (86% vs. 77%). It is reassuring that company leaders around the world are aware of the need to keep pace with their tooling and talent as their application architecture changes.

Jon Edvald is CEO and Co-Founder of Garden.io

Security at the Speed of Development
Accelerate Your Kubernetes Deployments
How to Map Your Deployment Pipeline
CI/CD Best Practices for Stress Free Software Development
The Importance of Continuous Deployment
10 Pillars of Pragmatic Kubernetes Deployments
Conquer SaaS Chaos with a SaaS DevOps Platform
Buyers Guide to Workload Protection
Protecting the SDLC
Join the 80% – DevOps for SAP: Laying the Foundations for Success
Streamlining Software Development with SAP Toolchain Integration
How to Get Started with DevOps for SAP
A Practical Guide to DevOps for SAP
Best Practices for GitHub
Buyers Guide for CNAPP
END_OF_DOCUMENT_TOKEN_TO_BE_REPLACED