The way that we develop and deliver software has changed dramatically in the past 5 years — but the metrics we use to measure quality remain largely the same. Despite seismic shifts in business expectations, development methodologies, system architectures, and team structures, most organizations still rely on quality metrics that were designed for a much different era.

Every other aspect of application delivery has been scrutinized and optimized as we transform our processes for DevOps. Why not put quality metrics under the microscope as well?

Are metrics like number of automated tests, test case coverage, and pass/fail rate important in the context of DevOps, where the goal is immediate insight into whether a given release candidate has an acceptable level of risk? What other metrics can help us ensure that the steady stream of updates don’t undermine the very user experience that we’re working so hard to enhance?

To provide the DevOps community an objective perspective on what quality metrics are most critical for DevOps success, Tricentis commissioned Forrester to research the topic. The results are published in a new ebook, Forrester Research on DevOps Quality Metrics that Matter: 75 Common Metrics—Ranked by Industry Experts.

The goal was to analyze how DevOps leaders measured and valued 75 quality metrics (selected by Forrester), then identify which metrics matter most for DevOps success. Here’s a look at the process:

2. From that sample, identify the firms with mature and successful DevOps adoptions (157 met Forrester’s criteria for this distinction).

3. Learn what quality metrics those experts actually measure, and how valuable they rate each metric that they regularly measure.

4. Use those findings to rate and rank each metric’s usage (how often experts use the metric) and value (how highly experts value the metric).

5. Compare the DevOps experts’ quality metric usage vs that of DevOps laggards. If there was a significant discrepancy, the metric is considered a DevOps differentiator.

The 75 DevOps quality metrics were divided into 4 categories:

For each category of quality metrics, we came up with a heat map showing usage vs. value rankings. For example, here is the heat map for the Build category metrics. 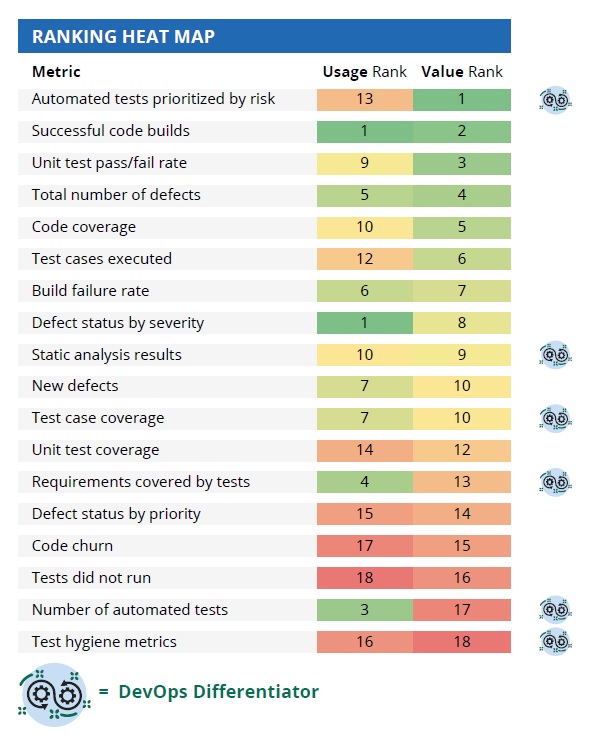 We also plotted the data for each metric into a quadrant with 4 sections:

■ Value added: Metrics that are used frequently by DevOps experts and consistently rated as valuable by the organizations who measure them.

■ Hidden gem: Metrics that are not used frequently by DevOps experts, but are consistently rated as valuable by the organizations who measure them.

■ Overrated: Metrics that are used frequently by DevOps experts, but not rated as valuable by the organizations who measure them.

■ Distraction: Metrics that are not used frequently by DevOps experts, and not rated as valuable by the organizations who measure them.

For example, here is the quadrant for Build category metrics: 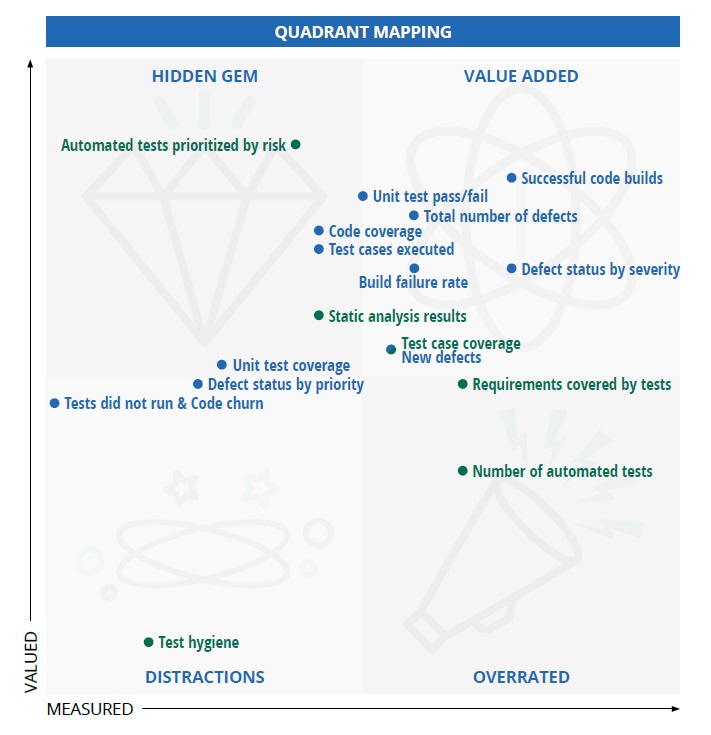 The ebook provides both heat maps and quadrants for all 4 categories, a quick look at each of the 75 metrics, per-category and overall analyses, and a few fun lists. Here’s a preview…

Most Used by DevOps Experts

The following metrics are the most frequently used (overall) by DevOps experts/leaders:

Most Valued by DevOps Experts

The following metrics are the most highly-valued (overall) by DevOps experts/leaders:

Cynthia Dunlop is Director of Content Strategy at Tricentis

Perforce Software announces a partnership with Microsoft to deliver the free Enhanced Studio Pack, providing development tools in a click-to-start model on the Azure cloud.

Tigera announced the availability of Calico Cloud in the Microsoft Azure Marketplace.

BrowserStack announced it has secured $200 million in Series B funding at a $4 billion valuation.

Copado announced its Summer 21 Release, opening up its platform for true multi-cloud DevOps for enterprise SaaS and low-code development.

Accurics announced a technology partnership with GitLab as well as the general availability of its integration with GitLab's Static Application Security Testing (SAST) solution.

Komodor Launches out of Stealth with $21Million Series A Funding
June 10, 2021

Komodor announced a $21 Million Series A funding round led by Accel.

The 5 Foundational DevOps Practices
Infrastructure Monitoring 101: The Power to Predict and Prevent
Get Your Cloud & Hybrid Migration Strategy Right in Government
AI and Machine Learning in Your Organization
APIs in Action: A Guide to Monitoring APIs for Performance
Making Sense of Digital Experience Monitoring Solutions
A Practical Guide to DevOps for SAP
Splunk Predictions 2021: Executive Report
Fast-Track Your Multicloud Monitoring Initiative
The Essential Guide to Container Monitoring
The Data Age Is Here. Are You Ready?
Assess Your Organization’s Maturity in Adopting AIOps
Business Service Reliability with AIOps
Cybersecurity Digital Blueprint for Pandemic Situation
The Road to Intelligent Infrastructure
END_OF_DOCUMENT_TOKEN_TO_BE_REPLACED