Skip to main content
Cracks and Convergence in DevOps
March 07, 2019

DevOps promotes and facilitates the coordination between the software developers who create apps and the operations personnel who deploy them, but as the newly released Evans Data survey DevOps 2019 shows the two groups often have very different ideas.

The survey of 250 developers and 250 IT operations professionals does show convergence in many areas such as continuous integration and application handoff, but very different viewpoints in other areas. For example:

■ The greatest benefit of workflow management tools for IT managers is capturing end-to-end business data, while for developers it's building dashboards to visualize operational data.

■ 58 percent of developers say they use tools not licensed or sanctioned by the IT team.

■ While the majority in both groups say the development team has the go / no go decision in deploying a software release, 41% of IT Managers say it's the ops team – compared to just 22% of developers.

■ IT Managers are more likely to say that technical software challenges are the main source of frustration in automating a network, while developers think it's lack of a budget for new tools.

While both the development team and operations are trying to develop, release and maintain applications in a large enterprise environment for the common good of their company, they are basically coming from different ends. Automation tools are essential for efficient interactions between the two groups to ensure that they come together in collaboration rather than confrontation – that along with an understanding of where each is coming from. 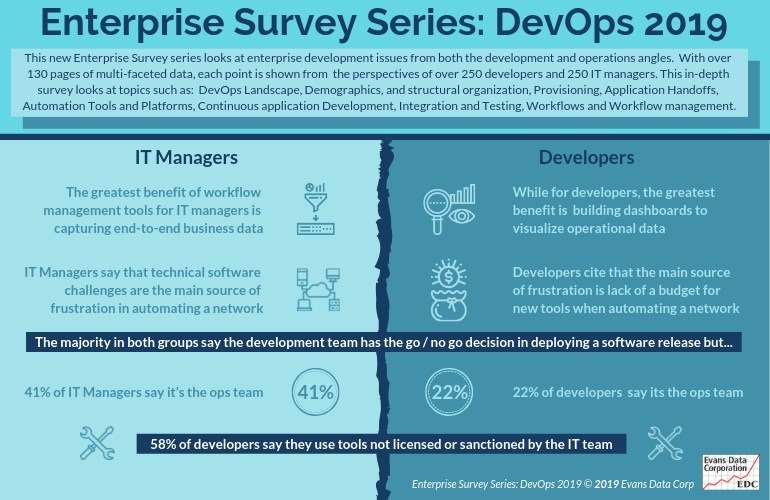 The survey is part of a new Enterprise Survey series launched this year by Evans Data and created to look at enterprise development issues from both the development and operations angles. With over 130 pages of multi-faceted data, each point is shown from both the development and operations viewpoints and looks at topics such as: DevOps Landscape, Demographics, and structural organization, Provisioning, Application Handoffs, Automation Tools and Platforms, Continuous application Development, Integration and Testing, Workflows and Workflow management.

How to Successfully Incorporate Observability Into Your Cloud Migration Strategy
Operationalizing Digital Experience with Synthetic Monitoring
How to Get Started with DevOps for SAP - a 10-Step Guide
Splunk IT + Observability Predictions for 2022
Splunk Executive Predictions 2022
Improving Customer Experience with End-to-End Application Monitoring
Accelerate Your Serverless Journey with Splunk and AWS
Splunk .conf21 Virtual
How to Get Started with OpenTelemetry
5 Rs: Which Strategy Is Right For Your Application Modernization & Migration to Google Cloud?
How to Use Digital Experience Monitoring to Improve Core Web Vitals
The State of Observability 2021
Isolating Issues and Improving User-Experience Across Your Full Stack
SplunkLive! Americas
A Beginner's Guide to Agile Development for SAP
END_OF_DOCUMENT_TOKEN_TO_BE_REPLACED

The State of Observability 2022
Build SAP into Wider DevOps Pipelines
A Beginner's Guide to Observability
Splunk IT and Observability Predictions 2022
Splunk Executive and Emerging Technology Predictions 2022
APIs in Action
How to Optimize Digital Experience with Service-Level Objectives
The State of Observability 2021
The 5 Foundational DevOps Practices
Infrastructure Monitoring 101: The Power to Predict and Prevent
Get Your Cloud & Hybrid Migration Strategy Right in Government
AI and Machine Learning in Your Organization
APIs in Action: A Guide to Monitoring APIs for Performance
Making Sense of Digital Experience Monitoring Solutions
A Practical Guide to DevOps for SAP
END_OF_DOCUMENT_TOKEN_TO_BE_REPLACED