Skip to main content
Are You Actually Doing DevOps?
March 13, 2017

There might be many people across organizations who claim that they’re using a DevOps approach, but often times, the “best practices” they’re using don’t align with DevOps methodologies. They can say what they do is “DevOps”, but what we’ve found is that many are actually not following basic agile methodology principles, and that’s not DevOps. Ever.

How Are We So Sure?

Electric Cloud gathered data from thousands of engineers and IT leaders across three major events – DOES 2016, Agile 2016 and Appshere 2016 (and compared it with specific data sets from the Puppet and DORA 2016 State of the DevOps Report) – asking them about their deployment and application release automation practices, and we found some interesting patterns.

For starters, the data show us that the majority of deployments are still manual. Specifically, over 70 percent of deployments use a combination of manual processes and some automation. While many think, in this instance, that they are automating their releases, this isn’t automation. Just because you’re using a Chef recipe to automate one of your releases, doesn’t mean you’re an automated shop. 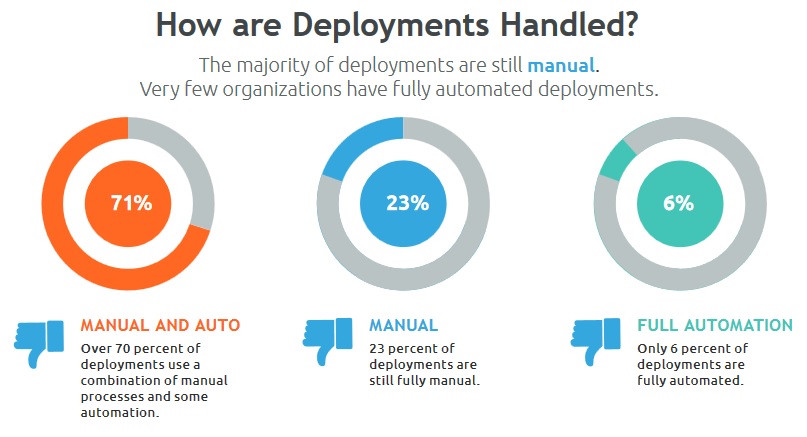 The two remaining datasets from this section tells us perhaps the most disappointing fact – 23 percent of deployments are still fully manual and only 6 percent of deployments are fully automated. Let’s face it; manual intervention often leads to errors and non-repeatable processes. No bueno. If testing or deployments are handled manually, it’s nearly impossible to implement continuous delivery or continuous integration in any way. What this statistic tells us is that many don’t realize that they have increased the risk of defects to their software (which almost always creates unplanned workloads), or a higher risk of deployments failing all together.

When relying on manual processes versus automation, an entire host of problems can emerge. The top challenges with manual deployments are:

The bottom line is this: manual deployments are extremely brittle and error-prone. This creates not only failed deployments, but also the loss of hundreds of worker hours trying to troubleshoot those failures. This is certainly painful in mission critical production environments, but carries great cost, even long before you reach production release.

As surprising as it might be to read in 2017, IT departments are still struggling to release software at the rate the business demands. As we see from the Puppet and DORA 2016 State of the DevOps Report, automation eliminates common challenges that come with manual deployments, and delivers better results. 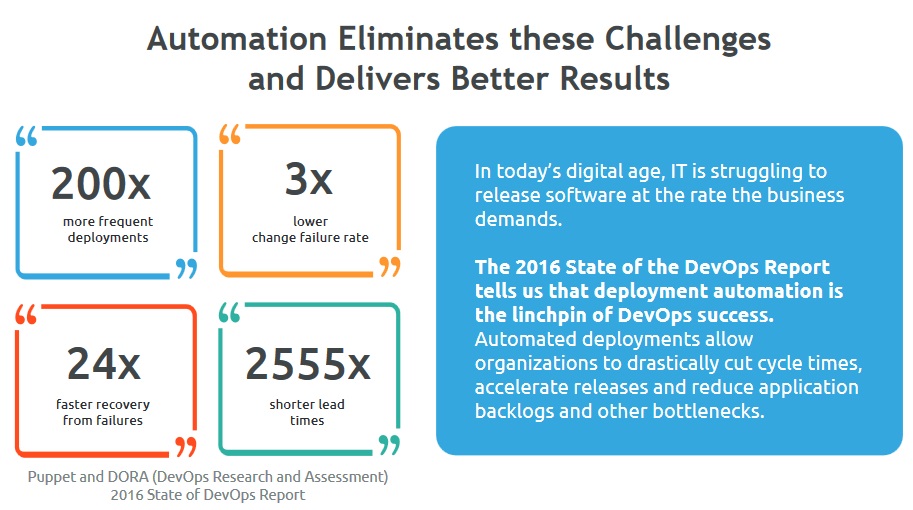 Deployment Automation is the Linchpin of DevOps Success

DevOps is not the responsibility of one person or one team. It’s a company mindset that when set in motion, delivers immediate value. The right Application Release Automation solution can dramatically accelerate your time-to-market and cycle times, give you confidence in your IT operations, enhance teamwork, and reduce operational costs.

No Code Orchestration of Octopus Deployments
All About Container Security
Introducing ActiveControl 9.0: 4 Principles for Removing Bottlenecks from SAP Change Delivery to Drive Business Growth
GitHub Actions and Octopus Deploy
DevOps Transformation Using No-Code Orchestration
CI/CD with GitHub Actions and Octopus Deploy
Automate Salesforce Releases: Live Panel with Nokia
Getting Started with Octopus Deploy
Rebuilding and Scaling Up Your SaaS Product
Database DevOps - Building Better Systems
Database DevOps - Imagining Better Systems
What DevOps Professionals Need to Know About SAP
A Beginner's Guide to Agile Development for SAP
A Step-by-Step Guide to CI/CD Workflows in SAP
What is DevOps for SAP (and how can it help)?
END_OF_DOCUMENT_TOKEN_TO_BE_REPLACED

Security at the Speed of Development
Accelerate Your Kubernetes Deployments
How to Map Your Deployment Pipeline
CI/CD Best Practices for Stress Free Software Development
The Importance of Continuous Deployment
10 Pillars of Pragmatic Kubernetes Deployments
State of Open Source Security Report 2022
Conquer SaaS Chaos with a SaaS DevOps Platform
Buyers Guide to Workload Protection
Protecting the SDLC
Join the 80% – DevOps for SAP: Laying the Foundations for Success
Streamlining Software Development with SAP Toolchain Integration
How to Get Started with DevOps for SAP
A Practical Guide to DevOps for SAP
Best Practices for GitHub
END_OF_DOCUMENT_TOKEN_TO_BE_REPLACED