Kubernetes has emerged as the standard for container management with 90% of respondents using it for orchestration, according to a new survey conducted by Rancher Labs.

Jump to infographic below

"It’s clear from the survey results that containers have become a key pillar of modern IT strategy with 85% of respondents running containers in production," said Peter Smails, CMO, Rancher Labs. "Additionally, 91% of respondents running more than one cluster combined with a healthy mix of on-premises and cloud-based deployments indicates multi-cluster/multi-cloud is emerging as a deployment strategy of choice."

The results of the survey illustrate rapid adoption of containers and Kubernetes. Key findings include:

■ 85% of respondents are running containers in production.

■ Architects, developers, and DevOps are the primary drivers of adoption (69%) followed by IT Operations (30%).

■ The most common use cases for containers today are designing microservices (71%), building customer facing applications (70%), and modernizing legacy applications (53%).

■ Hybrid cloud deployments are prevalent with 71% of respondents running on-premises workloads while 67% are running cloud-based applications.

■ Edge is emerging as an important use-case with 15% of respondents deploying containers for edge workloads.

As with any rapidly emerging technology, the survey also indicates that challenges remain, including:

■ Complexity remains a barrier to entry with more than 62% of respondents not currently running containers citing that as the primary reason slowing adoption.

■ Users are still wary of persistent storage due to complexity and perceived risk.

■ Service mesh is also perceived as complex which is limiting more widespread adoption. 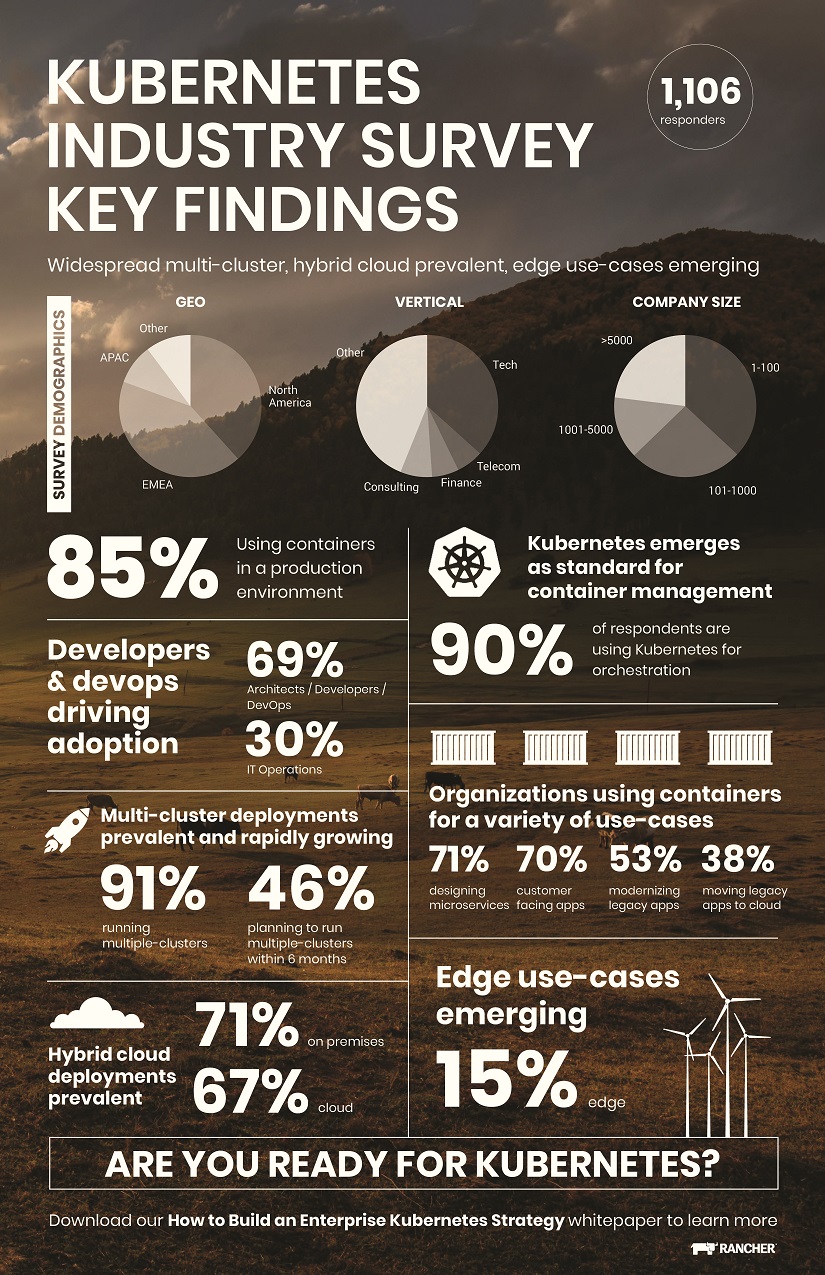 Methodology: Rancher Labs surveyed 1,106 tech users at large and small enterprises across a broad range of more than 25 industries, including technology, financial services, telecom, education, government and healthcare. The respondents were almost evenly split among EMEA and North America.

Accelerate Your Serverless Journey with Splunk and AWS
Splunk .conf21 Virtual
How to Get Started with OpenTelemetry
5 Rs: Which Strategy Is Right For Your Application Modernization & Migration to Google Cloud?
How to Use Digital Experience Monitoring to Improve Core Web Vitals
The State of Observability 2021
Isolating Issues and Improving User-Experience Across Your Full Stack
SplunkLive! Americas
A Beginner's Guide to Agile Development for SAP
Splunk Momentum: Infrastructure
How Splunk uses Splunk Observability to Monitor Cloud Apps
Scaling Kubernetes with Splunk and AWS
12 Immutable Rules for Observability
Accelerate the Move to SAP S/4 with DevOps Automation
A Guide to DevOps Tool Chain Integration in SAP
END_OF_DOCUMENT_TOKEN_TO_BE_REPLACED

APIs in Action
How to Optimize Digital Experience with Service-Level Objectives
The State of Observability 2021
The 5 Foundational DevOps Practices
Infrastructure Monitoring 101: The Power to Predict and Prevent
Get Your Cloud & Hybrid Migration Strategy Right in Government
AI and Machine Learning in Your Organization
APIs in Action: A Guide to Monitoring APIs for Performance
Making Sense of Digital Experience Monitoring Solutions
A Practical Guide to DevOps for SAP
Splunk Predictions 2021: Executive Report
Fast-Track Your Multicloud Monitoring Initiative
The Essential Guide to Container Monitoring
The Data Age Is Here. Are You Ready?
END_OF_DOCUMENT_TOKEN_TO_BE_REPLACED