DevOps and NetOps are both far more generous in their opinion of the other with respect to prioritization of efforts than traditional archetypes purport them to be, and they have a lot in common – even though they may disagree on details – according to a new survey by F5.

A common belief within DevOps circles is that automation not only enables greater frequency of delivery and deployment, but improves its overall success rate. Whenever manual intervention is required, the chances of errors creeping in increases. Human error is a significant factor in many an outage, after all. It’s not only logical, it’s borne out by our survey. Comparing deployment success rates against the percentage of deployment pipeline current automated yields a positive correlation – at least most of the time.

■ The majority of NetOps (65 percent) report a high frequency (90 percent or greater) of successful deployments. Of them, 86 percent have automated more than 75 percent of the production pipeline.

Based on the data it seems that there exists a "sweet spot for success": deploying once a week and automating at least 75 percent of the pipeline. 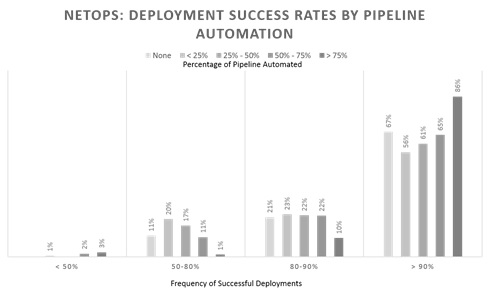 The Need for Speed

Our survey found that in spite of growing agreement on automation, there were distinct differences of opinion. One of these differences appears with respect to core concepts required to bring about the real changes needed to succeed in a fast-paced, multi-cloud world driven by an application economy.

NetOps were, on average, twice as likely to describe current deployment frequencies as "too frequent" (8 percent) than their DevOps counterparts (4 percent). Conversely, far more DevOps were dissatisfied with the frequency of delivery, with 26 percent describing theirs as "not frequent enough."

Still, clear majorities in both groups felt their current speed was "good enough for them."

■ Of the 70 percent of DevOps who think current delivery frequency is "good enough," 31 percent deliver changes to production once a week.

■ Of the 4 percent of DevOps who tagged delivery frequency as "too frequent," 38 percent deliver once a month.

Automation, For the Win

There is little disagreement between DevOps and NetOps on the importance and impact of automation on the application lifecycle – from development to delivery to deployment. There was a positive correlation between how NetOps rates the reliability, performance, and security of applications and automation of the pipeline. There is more confidence in the reliability and performance ratings of applications when the pipeline is at least 50–75 percent automated.

Based on the results of our survey, the general consensus around automation is definitely two thumbs up – one from NetOps and one from DevOps.

Automation is important, no matter which side of the coin you’re looking at.

Lori MacVittie is the Principal Technical Evangelist at F5 Networks

Security at the Speed of Development
Accelerate Your Kubernetes Deployments
How to Map Your Deployment Pipeline
CI/CD Best Practices for Stress Free Software Development
The Importance of Continuous Deployment
10 Pillars of Pragmatic Kubernetes Deployments
Conquer SaaS Chaos with a SaaS DevOps Platform
Buyers Guide to Workload Protection
Protecting the SDLC
Join the 80% – DevOps for SAP: Laying the Foundations for Success
Streamlining Software Development with SAP Toolchain Integration
How to Get Started with DevOps for SAP
A Practical Guide to DevOps for SAP
Best Practices for GitHub
Buyers Guide for CNAPP
END_OF_DOCUMENT_TOKEN_TO_BE_REPLACED