DevOps and NetOps are both far more generous in their opinion of the other with respect to prioritization of efforts than traditional archetypes purport them to be, and they have a lot in common – even though they may disagree on details – according to a new survey by F5.

We surveyed 884 NetOps and DevOps professionals during July 2017. We asked primarily about automation efforts, but also about those measures often cited by DevOps such as frequency and success rate of deployments. We also wanted know whether the perceptions held by each group were in line with the animosity portrayed by caricatures or had the two moved on and become if not fast friends, then at least frenemies. After all, both groups have the same goals – get an app to market that will propel the business to new heights.

And from the results, it certainly seems so. Both desire greater collaboration and interaction when it comes to moving apps to market, offering up specific examples as to just how they’d like to see that fall out.

And both groups share common perceptions of the security, reliability, and performance of the applications they’re delivering and then deploying. Perhaps surprisingly, neither is immune to the impact of the pace of change in the industry.

DevOps and NetOps alike are not entirely confident their roles will be relevant in five years, and both identified at least some gap between what they need to know to do their jobs and the skills/training they currently possess.

But we did uncover differences as to just how much technology should bridge the divide between development and production pipelines. That, in turn, validates a widely held belief that "the network" is a primary factor in the rise of multi-cloud as it drives developers and DevOps to seek solutions outside IT, primarily in the cloud.

That’s a direct quote, and a common theme among those in DevOps, in the minority, who believed their counterparts in NetOps were not prioritizing the "right things." That could be because they were pitted against the small number (8 percent) of NetOps who indicated "None" of their production pipeline was currently automated. Or perhaps they operate as part of a small group of DevOps (4 percent) who believe developers and DevOps and development should have NO access to the production pipeline via automation/self-service capabilities, and simply disagree.

The good news is they are in the minority on both counts. The majority of NetOps not only operate in environments where 50 percent or more of the production pipeline is automated, but a plurality (61 percent) also believe DevOps and developers should have greater access (50 percent or more) to that pipeline.

That means NetOps is squarely on board with DevOps' desire for more automation and self-service capabilities. 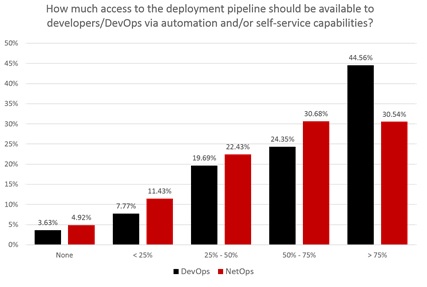 Furthermore, both groups overwhelmingly believe the other prioritizes "the right things," with 82 percent of DevOps and 76 percent of NetOps giving a head nod of approval to their counterparts' prioritization.

Lori MacVittie is the Principal Technical Evangelist at F5 Networks

Security at the Speed of Development
Accelerate Your Kubernetes Deployments
How to Map Your Deployment Pipeline
CI/CD Best Practices for Stress Free Software Development
The Importance of Continuous Deployment
10 Pillars of Pragmatic Kubernetes Deployments
Conquer SaaS Chaos with a SaaS DevOps Platform
Buyers Guide to Workload Protection
Protecting the SDLC
Join the 80% – DevOps for SAP: Laying the Foundations for Success
Streamlining Software Development with SAP Toolchain Integration
How to Get Started with DevOps for SAP
A Practical Guide to DevOps for SAP
Best Practices for GitHub
Buyers Guide for CNAPP
END_OF_DOCUMENT_TOKEN_TO_BE_REPLACED