Comic-Con recently sent out the attendee preregistration email for the 2017 conference, announcing that previous attendees get first dibs on tickets early next year before the lottery happens. The time to start buying plane tickets and preparing vacations days is now. With that known, let's compare two of the best conferences on the planet: DEFCON and Comic-Con.

Seems like just last week that DEFCON 2016 was in full swing. It was a Friday morning and a thousand degrees heat waiting in line at a stale cigarette-smelling Bally's toggling between airplane mode, getting kicked off of LTE and forced onto GSM networks, and the internet is dropping. The scene seems to be techies cutting core apps like mail and Slack. As far as the eye can see are lots of dudes — dressed-in-all-black dudes, mohawks dudes, big beards dudes and painted fingernails dudes. The few girls around are dressed like rebellious teens, and everyone is rocking backpacks. A few goons give the go-ahead, and the group is funneled into a large presentation room in a very organized fashion. The first presentation at DEFCON 2016 begins.

Backtrack two weeks; in San Diego, there are thousands of people waiting to get into preview night. This conference smells of occasional body odor and every tenth person is cosplaying. The line gets moving and is less organized as herds of people are pushing their way into a single escalator, at the bottom of which is the entrance to the floor of Comic-Con 2016. There lie ticket lines that can get you access to purchase conference exclusives or get into limited panels and previews. People are pretty aggressive here, and some of them have been sleeping outside like homeless people to get first dibs on these tickets. Going "on time" doesn't stand a chance at any limited exclusives, even with the five-day passes with preview night. Consequences of being a conference newb, for sure.

These two conferences could be the nerdiest of nerd in their arenas. Having attended Comic-Con every year for the last five years, but this was my first trip to DEFCON. Being part of the startup world makes me no stranger to conferences. I've been to many a tech conference, marketing conference and others in between. Having this experience, I wanted to step back and compare the cultures and styles of these two amazing conferences that have a lot of spillover and similarities to each other.

What makes these two conferences so special is that they both started as an idea, had a small cult following and a large, emerging industry behind them (whether the founders knew that made no difference in why they started them). Comic-Con started in 1970 and had 300 people attend it. DEFCON started in 1993 and had 30 or so people. The purpose behind each conference was to connect with peers who they only got to communicate with over the internet or on very rare occasion. Both conferences had an educational feel to them, with how-to presentations amongst peers to share new techniques. Each was very personable at first, but now they've grown to many thousands of people — Comic-Con at 110,000 and DEFCON at 25,000. Growth comes with pains; let's talk about them.

We are going to cover seven areas:

■ Badges/Access: getting them and presentation
■ Location: casinos or conventions
■ People: heroes or hackers
■ Cost: general costs around the conferences
■ Vendors
■ Panels and Presentations
■ Events: after-parties and post events

Needless to say, Comic-Con is notorious for the difficulty of accessing a badge. My wife and I both participated in the lottery (for the third year straight as we have been sneaking past years). She nailed it in five minutes in the website waiting room, and we got all-access badges for five days. The cost was $240 each — coincidently, the same cost for DEFCON! This was many months before the actual conference, so the badges were mailed to us. The badges were RFID chipped and branded by "The Walking Dead." Honestly not worth keeping but only for the fact they are so hard to get. Now, they will collect dust. 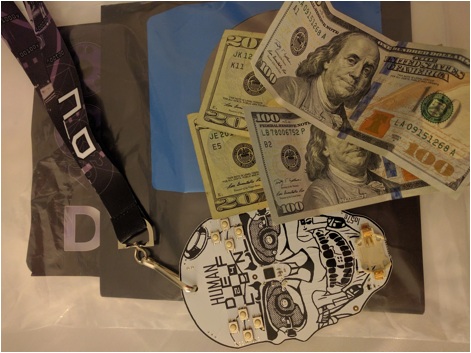 DEFCON has no internet waiting pool, no guarantees; you bring cash to the door to get your badge. For someone flying into Vegas, not knowing whether you will be able to attain a badge is a bit nerve-wracking. Will I get a badge? Will I wait in line for hours like Comic-Con? As I sit in the airport sipping a Stone Go To IPA, I'm banking that everything will be OK as I break one of my three Benjamins to have exact change for a badge purchase. My buddy was able to pick one up Thursday (secret sauce style) while I was in the air so everything worked out great. The DEFCON badges are dope! They are computer chips with flashing lights, and you need to hunt for a 2032 battery to get it activated. They have buttons on them so you can mod them out at one of the hacking villages. A badge with purpose, and I felt cool as hell wearing it. DEFCON also comes with a great soundtrack and well-designed booklet of the event.

I live in San Diego; it has beautiful beaches with surf, amazing natural attractions, marvelous Balboa Park, a great food scene and 100 microbreweries. I don't think there is a better place to vacation in the contiguous United States. I forgot to mention perfect weather, which is a big deal if you're cosplaying something fierce. The San Diego Convention Center is also located in downtown by the ballpark, bay and hundreds of bars and restaurants.

The San Diego Convention Center gets packed, and it can take an hour to walk from one side to the other during busy times (which is all the time at Comic-Con). Even with Comic-Con extending into the Padres stadium parking lot, there are so many people, and it's so crowded. As bad as that sounds, the San Diego Convention Center is pretty damn easy to navigate and access. 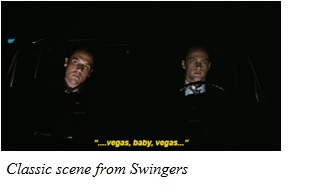 Vegas, baby! Hot as hell. Everything is air conditioned, and if you are hitting every presentation, you won't be going outside. The first day, I wore jeans and rocked a backpack; that was dumb. The second day, I was in board shorts and was much more comfortable. There is a themed restaurant and attraction on every corner and the most active nightlife around. Vegas is a playground for events, and every place is hungry for bodies, which means you could rent out a strip club for a party.

The best thing about Comic-Con and DEFCON is you know you're surrounded by people who love what you do, which seems strange, but when your day-to-day life has not a single person who can talk about servers or the latest graphic novel, it can get lonely. 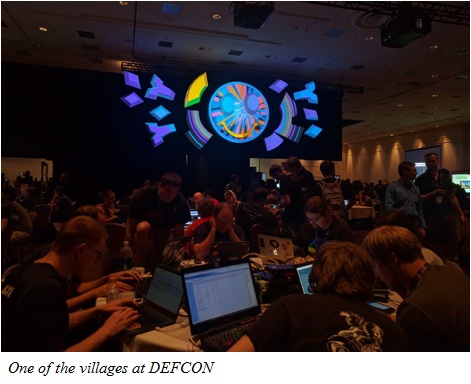 Underage hackers navigate cardboard boxes of cheeseburgers through drunken parties and 108 degree weather to fuel their friends participating in the capture-the-flag event. Imagine if at Comic-Con people crowdsourced drawing comics. It's awesome and inspirational. It's like I don't get off my computer enough, but this makes me feel like I'm not on my computer enough. At Comic-Con, you can't get on the network because there are so many bodies; at DEFCON, you have to airplane mode when you get bumped off your LTE connection. The people at these events are what's lovable about them. Most people aren't hackers, not even geeks. The community is growing; it has curious fans. I can just talk code with anyone in line — I've tried. Sometimes you land a hit, most times you don't. The parallels between the conferences are so in sync. 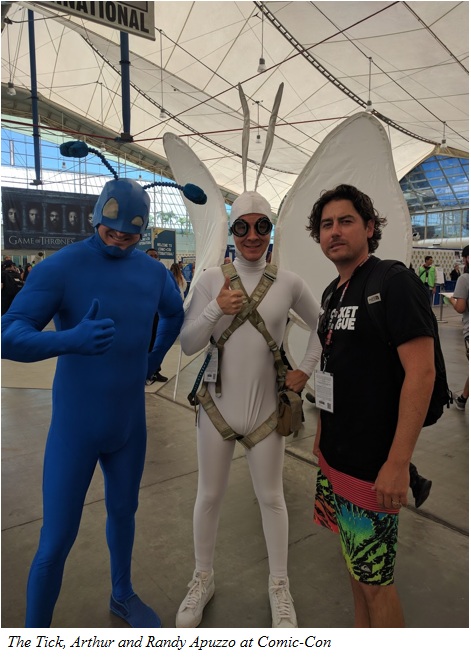 Every 50th person at Comic-Con is cosplaying, and I love that. Everyone is smiling, and people are perpetually taking photos with their heroes. Aside from every 50th person cosplaying, every 50th person smells of raging body odor that can burn your nostrils. It can get pretty rough if you are stuck in a presentation line behind one of the people who don't care about personal hygiene. This really put a damper on things, but it didn't stop us from enjoying seeing hundreds of storm troopers and a horde of people lapping on the mezzanine of the convention center.

Heroes take this one.

Randy Apuzzo is Founder and CEO of Zesty.io.

No Code Orchestration of Octopus Deployments
All About Container Security
Introducing ActiveControl 9.0: 4 Principles for Removing Bottlenecks from SAP Change Delivery to Drive Business Growth
CI/CD with GitHub Actions and Octopus Deploy
DevOps Transformation Using No-Code Orchestration
CI/CD with GitHub Actions and Octopus Deploy
Automate Salesforce Releases: Live Panel with Nokia
Getting Started with Octopus Deploy
Rebuilding and Scaling Up Your SaaS Product
Database DevOps - Building Better Systems
Database DevOps - Imagining Better Systems
What DevOps Professionals Need to Know About SAP
A Beginner's Guide to Agile Development for SAP
A Step-by-Step Guide to CI/CD Workflows in SAP
What is DevOps for SAP (and how can it help)?
END_OF_DOCUMENT_TOKEN_TO_BE_REPLACED

Security at the Speed of Development
Accelerate Your Kubernetes Deployments
How to Map Your Deployment Pipeline
CI/CD Best Practices for Stress Free Software Development
The Importance of Continuous Deployment
10 Pillars of Pragmatic Kubernetes Deployments
State of Open Source Security Report 2022
Conquer SaaS Chaos with a SaaS DevOps Platform
Buyers Guide to Workload Protection
Protecting the SDLC
Join the 80% – DevOps for SAP: Laying the Foundations for Success
Streamlining Software Development with SAP Toolchain Integration
How to Get Started with DevOps for SAP
A Practical Guide to DevOps for SAP
Best Practices for GitHub
END_OF_DOCUMENT_TOKEN_TO_BE_REPLACED