When was the last time your company experienced a significant database error? If it happened in the last 3 months, you’re in good company. A recent study conducted by DBmaestro asked 244 IT professionals this very question; 60% of respondents reported a crash or significant database error occurring in the last 6 months. Roughly one in ten respondents reported a serious database problem in the past week.

The survey, conducted online in October, sheds light on common practices in database management, errors and risks, as well as the rate of adoption of DevOps practices throughout all R&D functions. The results show that while DevOps practices have been widely adopted and utilized in application development, databases have been left behind. Crashes and major errors are prevalent among respondents, and even more so among companies that attempt to push database changes often.

Database errors can be expensive; estimates vary, but studies show that an hour of database downtime can cost your business anywhere from $100,000 to $600,000+ an hour. These estimates have been growing steadily in the last several years, and can be even bigger for companies that rely heavily on timely database data retrieval for business operations.

While there can be many different causes for serious database errors, the 2018 Database Devops Survey reveals that the top causes are accidental overrides, invalid code and conflicts between teams. These three horsemen of the apocalypse account for over 50% of major database errors, respondents report.

For these reasons, it comes as no surprise that pushing changes to the database involves dread. In fact, over one-third of respondents reported that they are anxious about pushing database changes at least half the time. 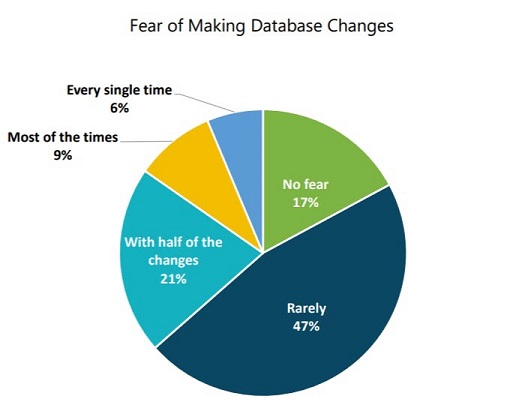 DevOps Practices Used Widely – But Not for Databases

The fear-inducing errors that lead to crises when pushing new changes have all long been solved in the world of code development. With the extensive adoption of DevOps practices across multiple industries, similar errors in application development have been reduced to nothing. In fact, when asked about continuous delivery practices, 54% of respondents report that they are fully implemented in at least half of the company’s application development projects.

It comes as no surprise that the result is slow, infrequent changes deployed to the database. Almost half (46%) of respondents reveal that they are only able to deploy database changes once or twice a month, a fact that stands in stark contrast to environments where CI/CD practices enable multiple deployments daily. In fact, only 14% of respondents currently have that capacity for database deployments. 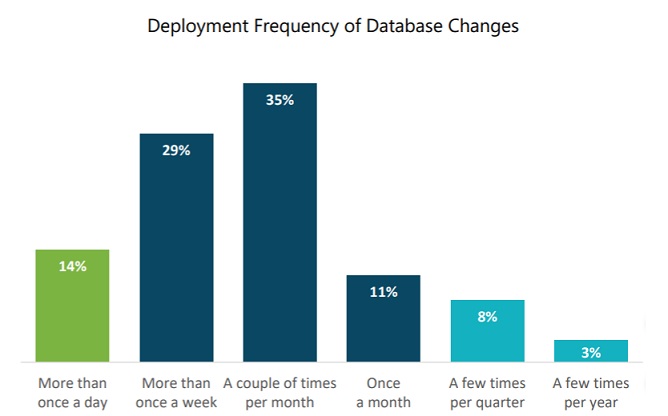 The bottom line is clear: database needs to hop on the DevOps bandwagon, and fast. The only way to eliminate and prevent major database errors is by automating processes and adopting continuous delivery practices, stat. In turn, this will also improve the ability to push database changes often and fast, making the database as agile as any other part of the company’s development process.

Yaniv Yehuda is Co-Founder and CTO of DBmaestro

Platform9 announced new platform capabilities in Platform9 5.5 that make it easier for cloud-native development and operations teams to build, scale, and operate apps and Kubernetes clusters in the cloud, on-premises, and at the edge.

How to Successfully Incorporate Observability Into Your Cloud Migration Strategy
Operationalizing Digital Experience with Synthetic Monitoring
How to Get Started with DevOps for SAP - a 10-Step Guide
Splunk IT + Observability Predictions for 2022
Splunk Executive Predictions 2022
Improving Customer Experience with End-to-End Application Monitoring
Accelerate Your Serverless Journey with Splunk and AWS
Splunk .conf21 Virtual
How to Get Started with OpenTelemetry
5 Rs: Which Strategy Is Right For Your Application Modernization & Migration to Google Cloud?
How to Use Digital Experience Monitoring to Improve Core Web Vitals
The State of Observability 2021
Isolating Issues and Improving User-Experience Across Your Full Stack
SplunkLive! Americas
A Beginner's Guide to Agile Development for SAP
END_OF_DOCUMENT_TOKEN_TO_BE_REPLACED

Build SAP into Wider DevOps Pipelines
A Beginner's Guide to Observability
Splunk IT and Observability Predictions 2022
Splunk Executive and Emerging Technology Predictions 2022
APIs in Action
How to Optimize Digital Experience with Service-Level Objectives
The State of Observability 2021
The 5 Foundational DevOps Practices
Infrastructure Monitoring 101: The Power to Predict and Prevent
Get Your Cloud & Hybrid Migration Strategy Right in Government
AI and Machine Learning in Your Organization
APIs in Action: A Guide to Monitoring APIs for Performance
Making Sense of Digital Experience Monitoring Solutions
A Practical Guide to DevOps for SAP
Splunk Predictions 2021: Executive Report
END_OF_DOCUMENT_TOKEN_TO_BE_REPLACED

DevOps Automation: What DevOps Tasks Should You Automate?
May 16, 2022
DevOps Isn't Only About Tools, It's About Teams and How They Collaborate
May 12, 2022
Cloud Workload Security - Improving Practices for Deployment and Run-Time
May 10, 2022
Knowledge and Experience Need to Ramp Quickly to Meet Massive Expectations for Cloud-Native Development
May 09, 2022
Modernization of Government Services and Its Impact on DevOps Market Outlook Through 2028
May 05, 2022
The State of DevOps Salaries 2022
May 04, 2022
Digital Innovation Pressures Rise for IT Leaders, Making APIs and Microservices Competitive Essentials
May 03, 2022
Network Management Megatrends 2022
May 02, 2022
How to Battle Bugs and Burnout, Fight FOMO, and Refocus on Teamwork
April 28, 2022
Securing Kubernetes – Nature and Nurture Plus Insurance
April 26, 2022
Why Developers Need to Incorporate Mobile Accessibility Into Design
April 25, 2022
The Future Is Smart: Cloud Native + AI
April 21, 2022
What’s the Difference? Continuous Integration, Continuous Delivery and Continuous Deployment Explained
April 19, 2022
AI in Customer Service: High Expectations, Low Satisfaction
April 18, 2022
Agile and DevOps for Continuous Quality and Software Delivery
April 14, 2022
Why Infrastructure Access is the New Strategic Priority for DevOps Teams
April 12, 2022
The Dollars and Sense of Application Security Testing ROI
April 11, 2022
Do You Need to Upgrade Your DevOps Solution? Here's What to Look for in a New One
April 07, 2022
DevOps Transformation Services – The Key to Speed Up Your Digital Transformation
April 05, 2022
Shift Left Meets Developer First
April 04, 2022