Skip to main content
A Language to Speak Dev[Sec]Ops
April 23, 2020

From SecOps to DevSecOps and SecDevOps, there seems to be an unending stream of new buzzwords in systems technology. With all this jargon, increasingly stories can read more like inside baseball rather than an intentional strategy.

To understand insertion of "Security" into "‘DevOps", we need to reminisce about the origins of term "DevOps". Fredric Paul of New Relic did a phenomenal job of mapping events leading to the inception of this popular term.

To appreciate DevOps, we need to deconstruct the language structure used by it's practitioners. In order to do this let's briefly detour to Denis Villeneuve's sci-fi space-encounter movie called Arrival where the primary protagonist is a linguistics professor who goes by the name Dr. Banks.

The four important concepts from linguistics that help Dr. Banks decode the language of heptapods (aka the alien ship) are

2. The Swadesh List
A good field linguist knows you can't just jump to abstract concepts like purpose without establishing the basics first.
But what are the basics? A list of basic concepts first put together in the 1950s by linguist Morris Swadesh.
They include concepts like I and you, one and many, as well as objects and actions in the observable world like person, blood, fire, eat, sleep, and walk.

3. Minimal Pairs
A minimal pair is a pair of words that differ in meaning because one sound has changed. The existence of a minimal pair shows that the differing sound is a crucial element of the language's structure.

4. The Sapir-Whorf Hypothesis
Most simply explained as the idea that the language you speak influences the way you think. This idea is controversial, since it has been demonstrated that languages do not restrict or constrain what people are able to perceive.

In order to rationalize these concepts from a systems engineering standpoint, we would need to pay homage to the linguists of "DevOps".

Ruby was born in 1993, conceived in a discussion between Yukihiro Matsumoto ("Matz") and a colleague. They were discussing the possibility of an object-oriented scripting-language. Matz stated in ruby-talk:00382 that he knew Perl, but did not like it very much; that it had the smell of a "toy" language. He also discussed that he knew Python, but didn't like it because it wasn't a true object-oriented programming language. Having looked around and not found a language suited for him, Yukihiro Matsumoto decided to create his own. After spending several months writing an interpreter, Matz finally published the first public version of Ruby (0.95) to various Japanese domestic newsgroups in December, 1995

Google and Amazon have long used software that automatically configures swathe of machines driving their online services. But these tools were never available to the outside world.

In 2005, Luke Kanies set out to provide Google-like IT automation for the rest of us, founding an open source project he called Puppet.

Two years later, he had some competition from the man once known as Amazon's "Master of Disaster." Jesse Robbins came by the name not because he broke things, but because he fixed them. He oversaw the operation of all Amazon websites. His new venture, Opscode, grew up around an open source project called Chef.

What is the Common Strand Between These Linguists?

Discreteness to reason about creating and orchestrating system units (host, storage, network, compute), The Swadesh List and Minimal Pairs to create basic concepts (provision host with compute capacity, attach storage and then network to other hosts), and The Sapir-Whorf Hypothesis leading to formation, provisioning and de-provisioning of cloud networks.

DevOps teams that deploy software are also responsible for maintaining security by design. In practice, though, teams too often neglect security or paste it on at the last moment. Thus, the idea to build security in from the start — via a process known as Dev[Sec]Ops — was born.

As J. Wolfgang Goerlich, a cybersecurity strategist at Creative Breakthroughs Inc., states roughly one in four DevOps teams integrate and automate some level of security controls. "This integration is generally performing scans and checks against the static code, the application and the underlying environment composition."

But this level of automation often requires tuning and adjustments to ensure it keeps pace with DevOps. For example, he said, traditional code-level scans take several days. "That's not effective when DevOps is changing the code on a daily or even hourly basis," Goerlich said.

Effective Dev[Sec]Ops teams secure without slowing, and they add continuous security without exceeding the team's capacity to change, he said. "It's paradoxically fast and slow, with security controls being added slowly while tuned to execute very quickly." 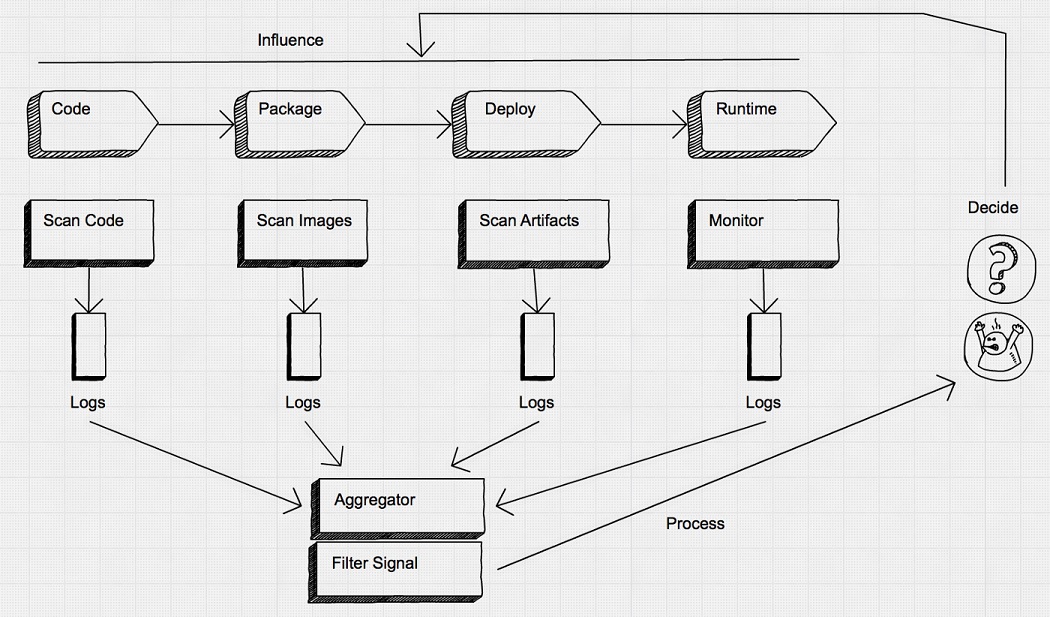 It's time for us to hit the reset button and approach security from a linguist standpoint. Learning from our devops predecessors, we need to create a simple language that influences each step in CI/CD without compromising its velocity.

How can we apply these concepts of linguistics to define security of an application?

We at ShiftLeft are attempting to define — Discreteness to reason about application security units (inputs, outputs, flows, data and open source used), The Swadesh List to create basic concepts (understand a flow from an input connected to one or more outputs, with data initialized in scope, using an open source library), Minimal Pairs to represent how a flow treats sensitive data and The Sapir-Whorf Hypothesis leading to define security from the perspective of connected application topology.

*Credits to Arika Okrent, linguist and author of In the Land of Invented Languages

No Code Orchestration of Octopus Deployments
All About Container Security
Introducing ActiveControl 9.0: 4 Principles for Removing Bottlenecks from SAP Change Delivery to Drive Business Growth
GitHub Actions and Octopus Deploy
DevOps Transformation Using No-Code Orchestration
CI/CD with GitHub Actions and Octopus Deploy
Automate Salesforce Releases: Live Panel with Nokia
Getting Started with Octopus Deploy
Rebuilding and Scaling Up Your SaaS Product
Database DevOps - Building Better Systems
Database DevOps - Imagining Better Systems
What DevOps Professionals Need to Know About SAP
A Beginner's Guide to Agile Development for SAP
A Step-by-Step Guide to CI/CD Workflows in SAP
What is DevOps for SAP (and how can it help)?
END_OF_DOCUMENT_TOKEN_TO_BE_REPLACED

Security at the Speed of Development
Accelerate Your Kubernetes Deployments
How to Map Your Deployment Pipeline
CI/CD Best Practices for Stress Free Software Development
The Importance of Continuous Deployment
10 Pillars of Pragmatic Kubernetes Deployments
State of Open Source Security Report 2022
Conquer SaaS Chaos with a SaaS DevOps Platform
Buyers Guide to Workload Protection
Protecting the SDLC
Join the 80% – DevOps for SAP: Laying the Foundations for Success
Streamlining Software Development with SAP Toolchain Integration
How to Get Started with DevOps for SAP
A Practical Guide to DevOps for SAP
Best Practices for GitHub
END_OF_DOCUMENT_TOKEN_TO_BE_REPLACED