Skip to main content
The State of the Developer Nation
August 05, 2016

VisionMobile has just released its new State of The Developer Nation Report for Q3 2016 based on the world's largest survey of software developers. Here at Heavybit, a program that helps developer-focused startups take their product market, we look forward to VisionMobile’s reports that allow us to keep up-to-date on the shifts in the developer landscape.

This quarter’s report delves into the key developer trends for 2016 and discusses mobile platforms, desktop platforms, server side languages, IoT markets, and the adoption of emerging technologies. Here are a few highlights from the report:

After years of stability, Android is now extending its dominance in device sales to even greater developer mindshare and priority over iOS.

In addition, Android is leaping to a new record for any platform since VisionMobile started measuring in 2010, with 79% mindshare amongst mobile developers. Interestingly, 47% of professional developers now consider Android their primary platform, up 7 percentage points in the last 6 months. Also notable, the number of professionals who consider iOS their primary platform fell 8 percentage points from 39% just six months ago to 31% in VisionMobile’s most recent survey.

When looking at geographic trends, there was a strong bias towards Android in the East and slight bias towards iOS in the West, with many more developers being based in the West. 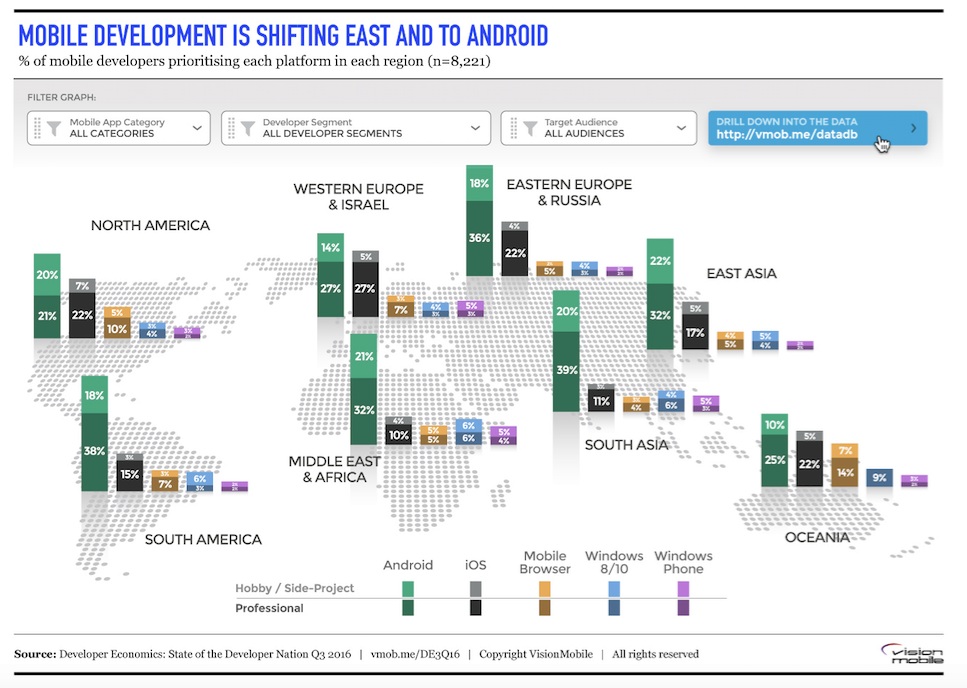 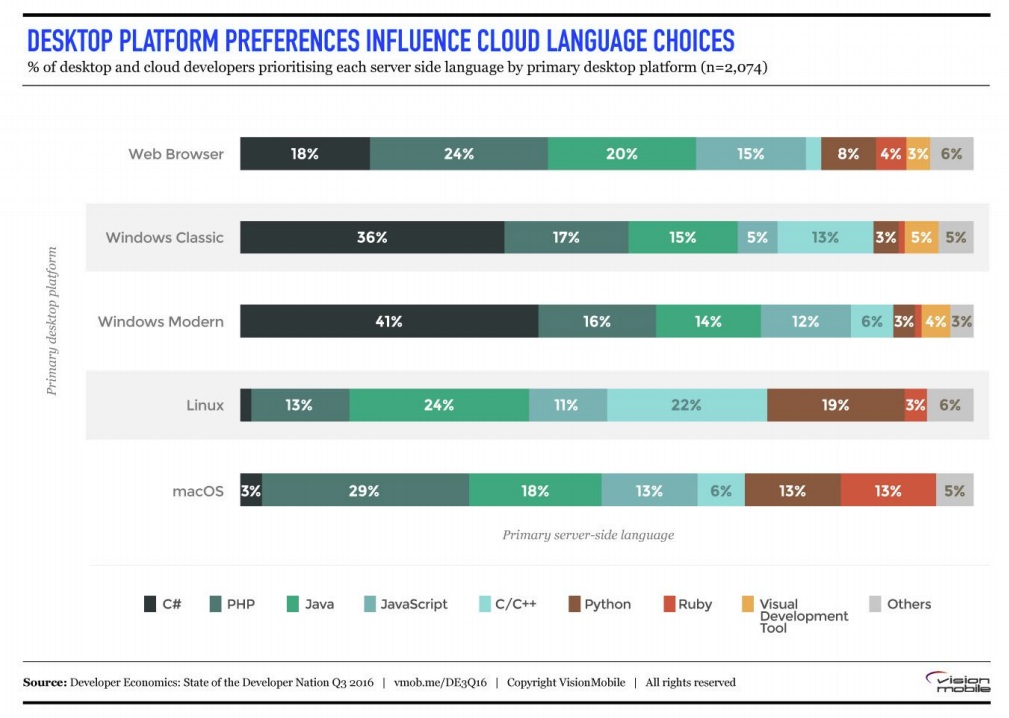 A New Phase in the IoT Market

In regards to verticals, VisionMobile is starting to get a large pool of fairly experienced IoT developers who know what they’re after; a more mature, more focused, IoT community. And what’s the first vertical that many IoT developers pick? Smart Home. Almost half (48%) of the IoT developer population now targets the Smart Home. The next most popular vertical is Wearables, at 29% a distant second. Smart Home is not just the biggest vertical in terms of developer interest, but also the fastest growing – up from 42% a year earlier. 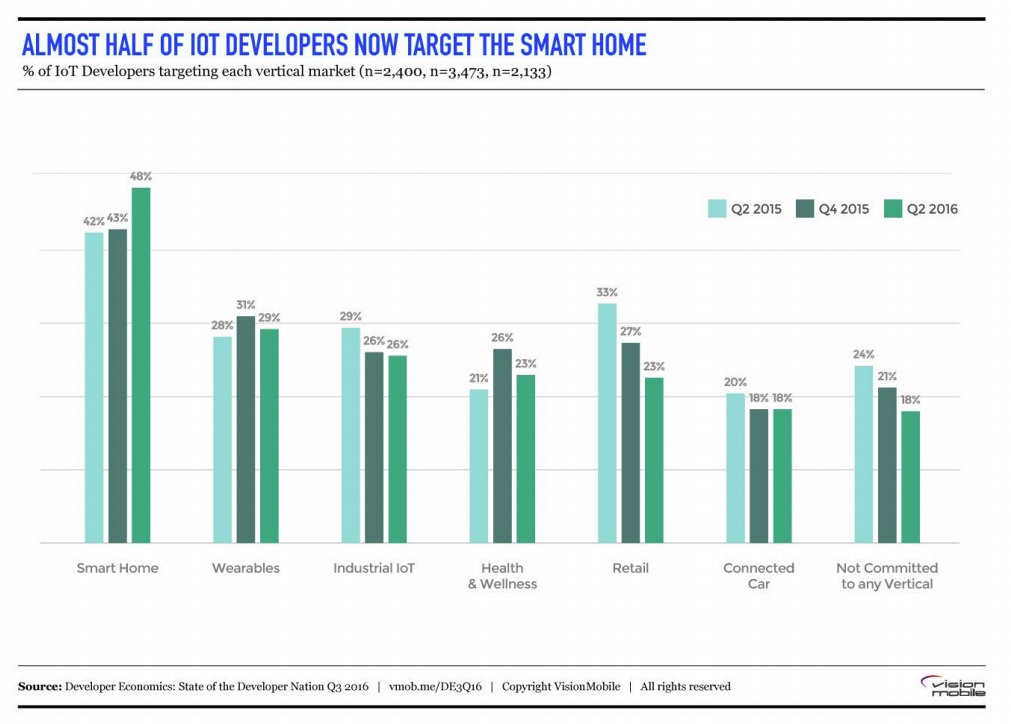 Where Are Developers Looking Next?

Where are developers looking next? Augmented and virtual reality, and machine learning – are they just the latest over-hyped technologies or the next big things? The level of developer interest in both areas suggests the latter. Nearly 23% of developers are already involved in either AR or VR development, most of those as a hobby or side project. An amazing 41% of developers are involved in data science or machine learning in some way, 33% of those in a professional capacity. 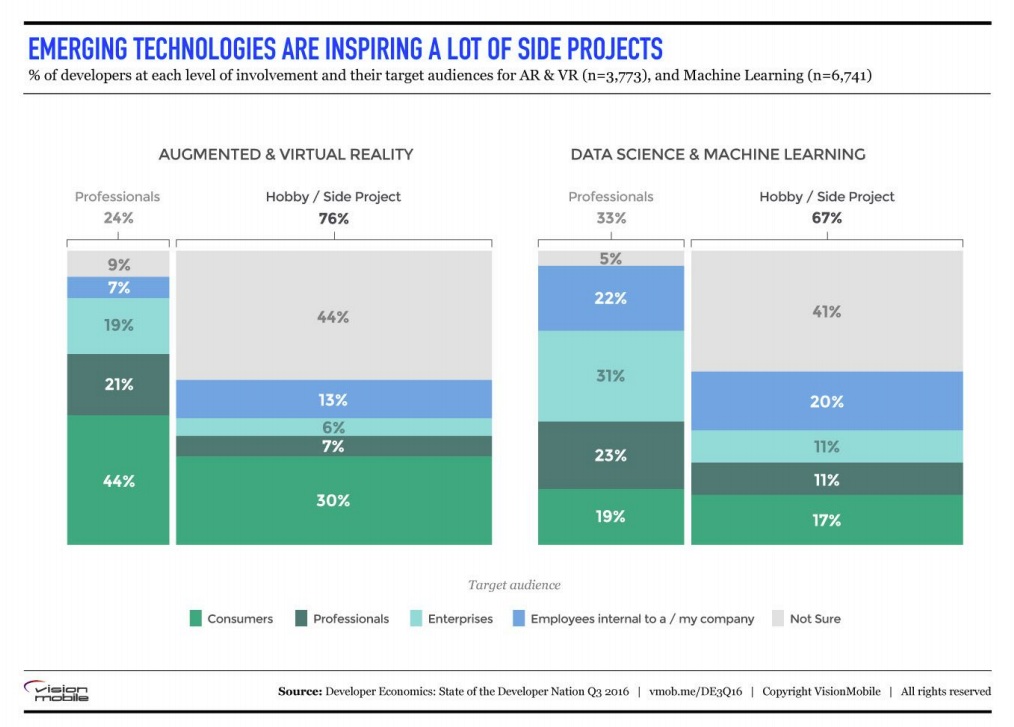 The survey reached an impressive 16,500+ respondents from 145 countries around the world. This Developer Economics series continues to be the most global independent research on mobile, desktop, IoT and cloud developers combined ever conducted.

No Code Orchestration of Octopus Deployments
All About Container Security
Introducing ActiveControl 9.0: 4 Principles for Removing Bottlenecks from SAP Change Delivery to Drive Business Growth
GitHub Actions and Octopus Deploy
DevOps Transformation Using No-Code Orchestration
CI/CD with GitHub Actions and Octopus Deploy
Automate Salesforce Releases: Live Panel with Nokia
Getting Started with Octopus Deploy
Rebuilding and Scaling Up Your SaaS Product
Database DevOps - Building Better Systems
Database DevOps - Imagining Better Systems
What DevOps Professionals Need to Know About SAP
A Beginner's Guide to Agile Development for SAP
A Step-by-Step Guide to CI/CD Workflows in SAP
What is DevOps for SAP (and how can it help)?
END_OF_DOCUMENT_TOKEN_TO_BE_REPLACED

Security at the Speed of Development
Accelerate Your Kubernetes Deployments
How to Map Your Deployment Pipeline
CI/CD Best Practices for Stress Free Software Development
The Importance of Continuous Deployment
10 Pillars of Pragmatic Kubernetes Deployments
State of Open Source Security Report 2022
Conquer SaaS Chaos with a SaaS DevOps Platform
Buyers Guide to Workload Protection
Protecting the SDLC
Join the 80% – DevOps for SAP: Laying the Foundations for Success
Streamlining Software Development with SAP Toolchain Integration
How to Get Started with DevOps for SAP
A Practical Guide to DevOps for SAP
Best Practices for GitHub
END_OF_DOCUMENT_TOKEN_TO_BE_REPLACED