Organizations that are actively managing the quality of open source components flowing into production applications are realizing a 28 percent improvement in developer productivity, a 30 percent reduction in overall development costs, and a 48 percent increase in application quality, according to the 2017 State of the Software Supply Chain Report from Sonatype.

Additional key findings of the 2017 State of the Software Supply Chain report include:

Consumption of open source components is growing on a massive scale

■ This puts the onus on DevOps organizations to actively govern which OSS projects they work with, and which components they ultimately consume.

Number of downloaded components with known vulnerabilities is slightly decreasing

■ In 2016, the percent of Java components downloaded from the Central Repository that contained known security vulnerabilities fell to 5.5 percent (1 in 18), down from 6.1 percent the year prior.

■ Although this defect download ratio is far from perfect, there is empirical evidence that hygiene is beginning to improve with ratios declining slightly in each of the last three years.

The regulatory landscape is rapidly changing

■ In the past year in the United States, the White House, four federal agencies, and the automotive industry have released new guidelines to improve the quality, safety, and security of software supply chains. 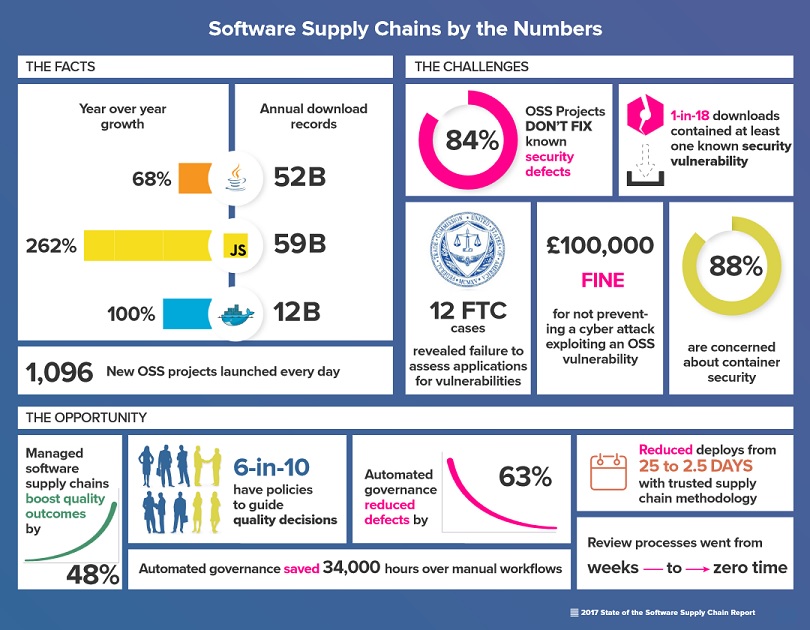 Wayne Jackson, CEO, Sonatype, said: “Companies are no longer building software applications from scratch, they are manufacturing them as fast as they can using an infinite supply of open source component parts. However, many still rely on manual and time consuming governance and security practices instead of embracing DevOps-native automation. Our research continues to show that development teams managing trusted software supply chains are dramatically improving quality and productivity.”

Methodology: The 2017 State of the Software Supply Chain Report blends a broad set of public and proprietary data with expert research and analysis. This year’s report extends beyond Java data to include supply chain findings from JavaScript, NuGet, Python, and Docker ecosystems.

Pete Goldin is Editor and Publisher of DEVOPSdigest

No Code Orchestration of Octopus Deployments
All About Container Security
Introducing ActiveControl 9.0: 4 Principles for Removing Bottlenecks from SAP Change Delivery to Drive Business Growth
CI/CD with GitHub Actions and Octopus Deploy
DevOps Transformation Using No-Code Orchestration
CI/CD with GitHub Actions and Octopus Deploy
Automate Salesforce Releases: Live Panel with Nokia
Getting Started with Octopus Deploy
Rebuilding and Scaling Up Your SaaS Product
Database DevOps - Building Better Systems
Database DevOps - Imagining Better Systems
What DevOps Professionals Need to Know About SAP
A Beginner's Guide to Agile Development for SAP
A Step-by-Step Guide to CI/CD Workflows in SAP
What is DevOps for SAP (and how can it help)?
END_OF_DOCUMENT_TOKEN_TO_BE_REPLACED

Security at the Speed of Development
Accelerate Your Kubernetes Deployments
How to Map Your Deployment Pipeline
CI/CD Best Practices for Stress Free Software Development
The Importance of Continuous Deployment
10 Pillars of Pragmatic Kubernetes Deployments
State of Open Source Security Report 2022
Conquer SaaS Chaos with a SaaS DevOps Platform
Buyers Guide to Workload Protection
Protecting the SDLC
Join the 80% – DevOps for SAP: Laying the Foundations for Success
Streamlining Software Development with SAP Toolchain Integration
How to Get Started with DevOps for SAP
A Practical Guide to DevOps for SAP
Best Practices for GitHub
END_OF_DOCUMENT_TOKEN_TO_BE_REPLACED