Omdia released the IT Operations Survey: 2022, and here are some of the findings related to DevOps, reported by Roy Illsley, Chief Analyst at Omdia:

Unsurprisingly SMBs are slowest to adopt DevOps, with only 8% reporting they have already fully deployed it.

Large organizations report being the most mature, with 30% of respondents stating they are already fully deployed. Interestingly, in 2022 the number in this group deploying DevOps dips to 20%, with 2023 the year 50% state they will complete deployment. The net take-away is that DevOps is a multi-year deployment.

Education reported 71% of respondents put top and second most important barrier was complexity of implementation.

Media and entertainment reported 71% of respondents put miss-trust in developers as the top and second most important barrier to DevOps.

52% of CIOs reported lack of skills as top and second most important barrier. This was in-line with other line of business C-suite that also put it top of their list with 42%.

Improving efficiency is consistently reported as a top driver for DevOps, but some variations exist that require specific messaging: 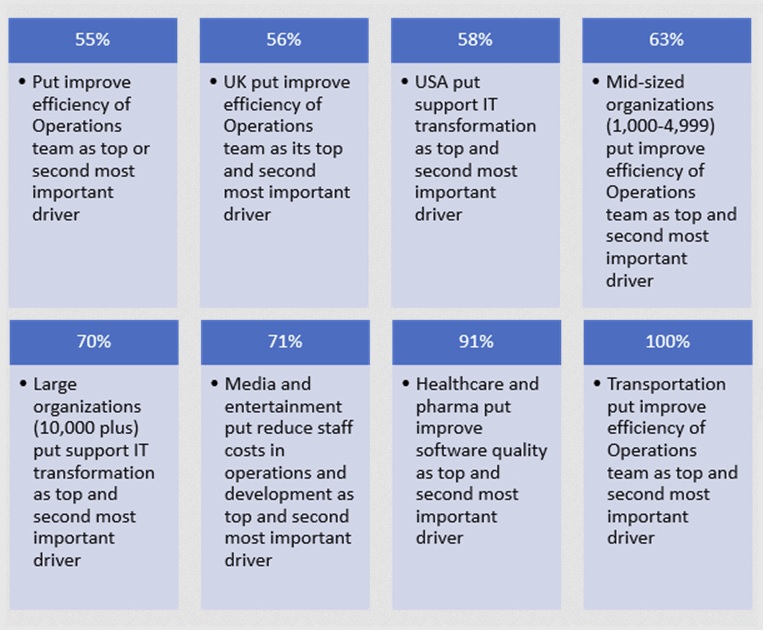 Pete Goldin is Editor and Publisher of DEVOPSdigest

Security at the Speed of Development
Accelerate Your Kubernetes Deployments
How to Map Your Deployment Pipeline
CI/CD Best Practices for Stress Free Software Development
The Importance of Continuous Deployment
10 Pillars of Pragmatic Kubernetes Deployments
Conquer SaaS Chaos with a SaaS DevOps Platform
Buyers Guide to Workload Protection
Protecting the SDLC
Join the 80% – DevOps for SAP: Laying the Foundations for Success
Streamlining Software Development with SAP Toolchain Integration
How to Get Started with DevOps for SAP
A Practical Guide to DevOps for SAP
Best Practices for GitHub
Buyers Guide for CNAPP
END_OF_DOCUMENT_TOKEN_TO_BE_REPLACED