The advent of DevOps has completely changed the way we build and deliver software and, inevitably, creates unique challenges for developers juggling a wide range of tools successfully. JFrog recently conducted a survey to gain insights into how developers and DevOps engineers use different tools and technologies and the challenges they encounter in their daily work. Upon comparing these findings to those of a similar survey conducted in 2013, things seem to be getting better for developers and DevOps, but the advances are not evenly distributed, as some areas have seen dramatic improvements while others have remained relatively stable.

The survey drew in over 1,000 responses from more than 50 countries, the majority coming from the US (45 percent) and Europe (25 percent). Nine different industry sectors were significantly represented, the dominant ones being telecommunications, technology, Internet and electronics, and finance and financial services.

Combining Multiple Technologies is Getting Easier

The most dramatic finding was that integrating multiple types of libraries and languages, which has long been a serious pain point for developers, has become much easier over the last two years. The number of developers who identified this as the most challenging task dropped from 37 percent in 2013 to 12 percent in 2015. This clearly shows that using multiple types of platforms and technologies, even in a single application, is the new norm.

Developers reported a decrease in “very time consuming” non-development tasks across the board. The most striking result is the decrease in the number of developers complaining about waiting during build and test time, as the automation of continuous delivery pipelines makes them more efficient.

Last Minute Code Changes Are Not Going Away

Last minute code changes remain the number one reason for release delays, but progress is being made in reducing their negative impact with automated continuous delivery pipelines, which shorten release cycles and thus enable teams to better react to sudden changes.

One of the clearest and most significant findings in the survey is that developers and DevOps engineers are using more and more development technologies in their daily work, with some using as many as six or seven different formats simultaneously. An overwhelming 76 percent of respondents used more than one development and packaging technology in their most recent project. This was especially true for Docker users, 91 percent of whom indicated that they use two or more technologies and 27 percent using six technologies at a time. 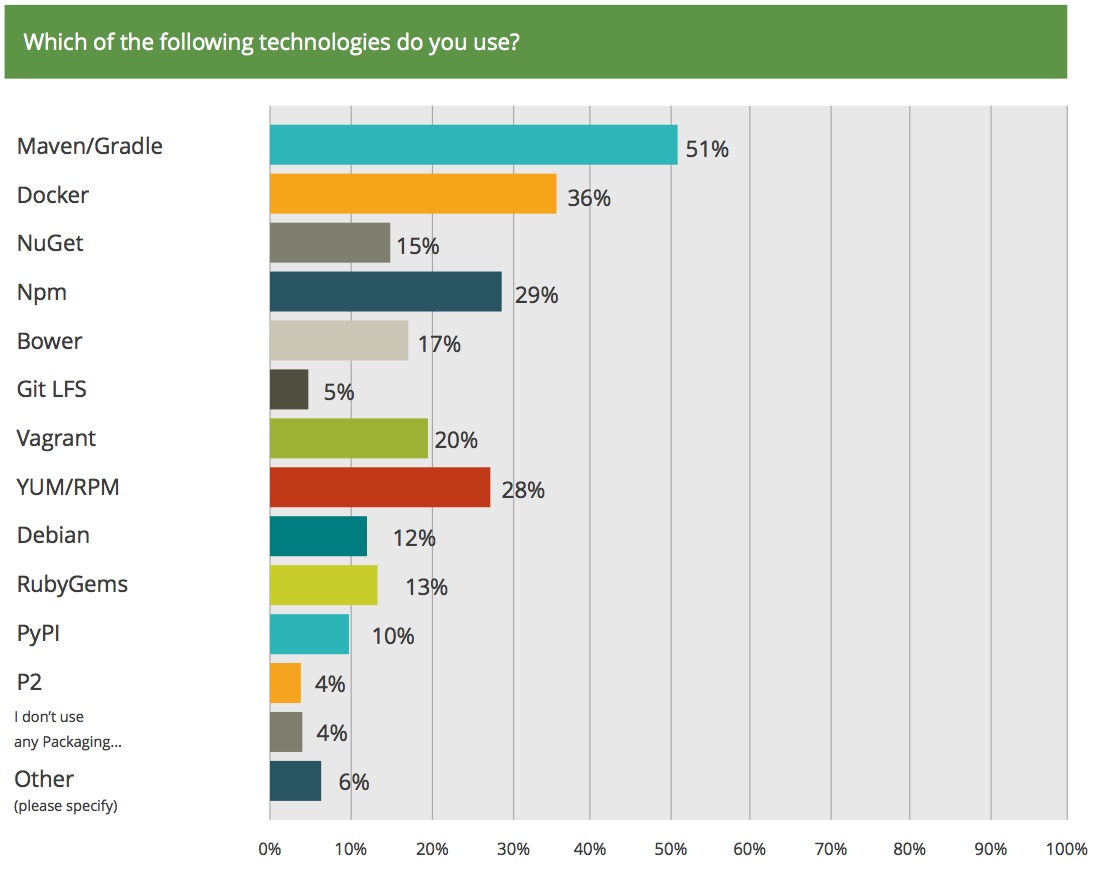 Baruch Sadogursky is the Developer Advocate at JFrog.

How to Successfully Incorporate Observability Into Your Cloud Migration Strategy
Operationalizing Digital Experience with Synthetic Monitoring
How to Get Started with DevOps for SAP - a 10-Step Guide
Splunk IT + Observability Predictions for 2022
Splunk Executive Predictions 2022
Improving Customer Experience with End-to-End Application Monitoring
Accelerate Your Serverless Journey with Splunk and AWS
Splunk .conf21 Virtual
How to Get Started with OpenTelemetry
5 Rs: Which Strategy Is Right For Your Application Modernization & Migration to Google Cloud?
How to Use Digital Experience Monitoring to Improve Core Web Vitals
The State of Observability 2021
Isolating Issues and Improving User-Experience Across Your Full Stack
SplunkLive! Americas
A Beginner's Guide to Agile Development for SAP
END_OF_DOCUMENT_TOKEN_TO_BE_REPLACED

The State of Observability 2022
Build SAP into Wider DevOps Pipelines
A Beginner's Guide to Observability
Splunk IT and Observability Predictions 2022
Splunk Executive and Emerging Technology Predictions 2022
APIs in Action
How to Optimize Digital Experience with Service-Level Objectives
The State of Observability 2021
The 5 Foundational DevOps Practices
Infrastructure Monitoring 101: The Power to Predict and Prevent
Get Your Cloud & Hybrid Migration Strategy Right in Government
AI and Machine Learning in Your Organization
APIs in Action: A Guide to Monitoring APIs for Performance
Making Sense of Digital Experience Monitoring Solutions
A Practical Guide to DevOps for SAP
END_OF_DOCUMENT_TOKEN_TO_BE_REPLACED

The State of Observability 2022
May 24, 2022
DevOps for Low-Code - Friend or Foe?
May 23, 2022
Development vs. Production: Software Security Challenges in Today's Environment - and the Solution
May 19, 2022
How to Prepare Your Team for the Future of DevSecOps
May 17, 2022
DevOps Automation: What DevOps Tasks Should You Automate?
May 16, 2022
DevOps Isn't Only About Tools, It's About Teams and How They Collaborate
May 12, 2022
Cloud Workload Security - Improving Practices for Deployment and Run-Time
May 10, 2022
Knowledge and Experience Need to Ramp Quickly to Meet Massive Expectations for Cloud-Native Development
May 09, 2022
Modernization of Government Services and Its Impact on DevOps Market Outlook Through 2028
May 05, 2022
The State of DevOps Salaries 2022
May 04, 2022
Digital Innovation Pressures Rise for IT Leaders, Making APIs and Microservices Competitive Essentials
May 03, 2022
Network Management Megatrends 2022
May 02, 2022
How to Battle Bugs and Burnout, Fight FOMO, and Refocus on Teamwork
April 28, 2022
Securing Kubernetes – Nature and Nurture Plus Insurance
April 26, 2022
Why Developers Need to Incorporate Mobile Accessibility Into Design
April 25, 2022
The Future Is Smart: Cloud Native + AI
April 21, 2022
What’s the Difference? Continuous Integration, Continuous Delivery and Continuous Deployment Explained
April 19, 2022
AI in Customer Service: High Expectations, Low Satisfaction
April 18, 2022
Agile and DevOps for Continuous Quality and Software Delivery
April 14, 2022
Why Infrastructure Access is the New Strategic Priority for DevOps Teams
April 12, 2022