The term "bug," meant to describe glitches in software, dates back to 1947 when engineers at Harvard found a moth stuck to computer components. The moth, found between relay contacts and causing the computer to malfunction, was famously recorded by Grace Murray Hopper in her log book as "first actual case of bug being found."

Today, 70 years later, software testing is an increasingly vital part of nearly every business in industries across the board because of the widespread adoption of digitization, automation, and emerging technologies. And so, software testing service providers, which work across a broad spectrum of industries in tech, find themselves with a unique window into the software of these businesses and their development cycles.

QualiTest recently compiled a data report analyzing software testers globally. The report details the Quality Assurance and Software Testing job market, one of the fastest growing job markets and a bellwether of tech employment due to QA's involved in nearly every conceivable industry.

The questions posed before compiling the data were the following:

■ How has the state of software testers evolved?

■ What are the global and gender differences within the software testing community?

■ What skills must software testers possess, and how do they compare to past requirements?

The report's highlights include:

■ The country with the highest concentration of software testers is Ireland, followed by the US, Canada, and Israel. 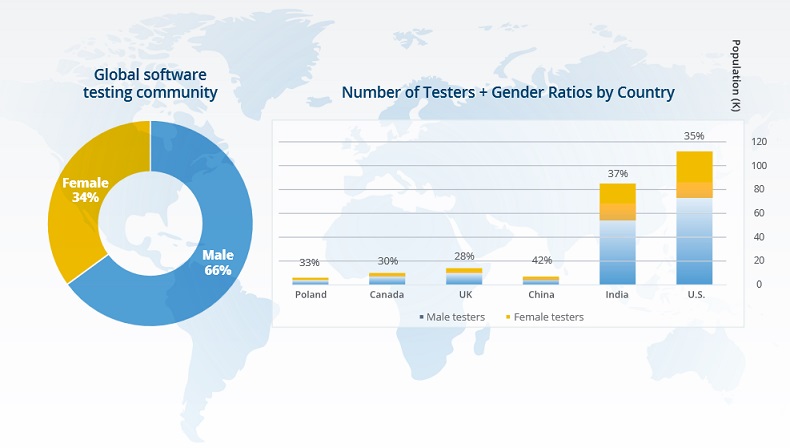 Ayal Zylberman is CEO and Founder of QualiTest Group

How to Successfully Incorporate Observability Into Your Cloud Migration Strategy
Operationalizing Digital Experience with Synthetic Monitoring
How to Get Started with DevOps for SAP - a 10-Step Guide
Splunk IT + Observability Predictions for 2022
Splunk Executive Predictions 2022
Improving Customer Experience with End-to-End Application Monitoring
Accelerate Your Serverless Journey with Splunk and AWS
Splunk .conf21 Virtual
How to Get Started with OpenTelemetry
5 Rs: Which Strategy Is Right For Your Application Modernization & Migration to Google Cloud?
How to Use Digital Experience Monitoring to Improve Core Web Vitals
The State of Observability 2021
Isolating Issues and Improving User-Experience Across Your Full Stack
SplunkLive! Americas
A Beginner's Guide to Agile Development for SAP
END_OF_DOCUMENT_TOKEN_TO_BE_REPLACED

The State of Observability 2022
Build SAP into Wider DevOps Pipelines
A Beginner's Guide to Observability
Splunk IT and Observability Predictions 2022
Splunk Executive and Emerging Technology Predictions 2022
APIs in Action
How to Optimize Digital Experience with Service-Level Objectives
The State of Observability 2021
The 5 Foundational DevOps Practices
Infrastructure Monitoring 101: The Power to Predict and Prevent
Get Your Cloud & Hybrid Migration Strategy Right in Government
AI and Machine Learning in Your Organization
APIs in Action: A Guide to Monitoring APIs for Performance
Making Sense of Digital Experience Monitoring Solutions
A Practical Guide to DevOps for SAP
END_OF_DOCUMENT_TOKEN_TO_BE_REPLACED

How to Prepare Your Team for the Future of DevSecOps
May 17, 2022
DevOps Automation: What DevOps Tasks Should You Automate?
May 16, 2022
DevOps Isn't Only About Tools, It's About Teams and How They Collaborate
May 12, 2022
Cloud Workload Security - Improving Practices for Deployment and Run-Time
May 10, 2022
Knowledge and Experience Need to Ramp Quickly to Meet Massive Expectations for Cloud-Native Development
May 09, 2022
Modernization of Government Services and Its Impact on DevOps Market Outlook Through 2028
May 05, 2022
The State of DevOps Salaries 2022
May 04, 2022
Digital Innovation Pressures Rise for IT Leaders, Making APIs and Microservices Competitive Essentials
May 03, 2022
Network Management Megatrends 2022
May 02, 2022
How to Battle Bugs and Burnout, Fight FOMO, and Refocus on Teamwork
April 28, 2022
Securing Kubernetes – Nature and Nurture Plus Insurance
April 26, 2022
Why Developers Need to Incorporate Mobile Accessibility Into Design
April 25, 2022
The Future Is Smart: Cloud Native + AI
April 21, 2022
What’s the Difference? Continuous Integration, Continuous Delivery and Continuous Deployment Explained
April 19, 2022
AI in Customer Service: High Expectations, Low Satisfaction
April 18, 2022
Agile and DevOps for Continuous Quality and Software Delivery
April 14, 2022
Why Infrastructure Access is the New Strategic Priority for DevOps Teams
April 12, 2022
The Dollars and Sense of Application Security Testing ROI
April 11, 2022
Do You Need to Upgrade Your DevOps Solution? Here's What to Look for in a New One
April 07, 2022
DevOps Transformation Services – The Key to Speed Up Your Digital Transformation
April 05, 2022