Most IT practitioners in the United States earn $100,000 or more in annual salary (up from 47 percent last year), according to Puppet's 2016 DevOps Salary Report.

"Today, software is everywhere and is the driver of every business," said Nigel Kersten, CIO of Puppet. "For organizations to compete in this new world, they need the people and technology that enable a frictionless delivery of high quality software. This year's DevOps Salary Report shows that organizations are realizing the pressures of these dynamics and are pushing to hire, retain and manage the best IT teams to gain a strong competitive advantage." 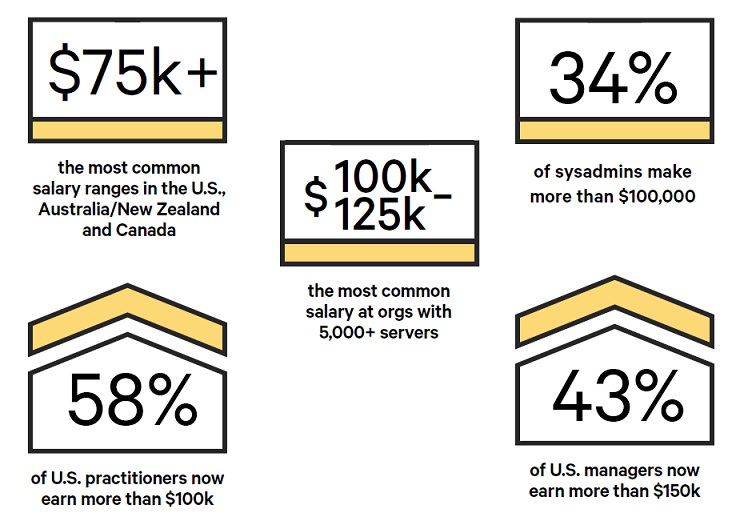 In this year's survey, for the first time, respondents were also asked to report on the number of servers and employees in their organization. Data revealed that organizations with more than 10,000 servers pay the highest percentage of salaries that are $150,000 annually or more. These findings show that companies investing the most in servers and infrastructure are also investing the most in the employees who are managing them.

- The most lucrative practitioner salaries by industry are in the US. IT practitioners based in the US are more likely to earn $100,000+ if they work in the technology (65 percent), media/entertainment (65 percent), retail/consumer/e-commerce (65 percent) or finance (61 percent) industries.

The salary report is based on data gathered from more than 4,600 respondents to the survey.

Tim Zonca is VP of Product Marketing for Puppet.

Security at the Speed of Development
Accelerate Your Kubernetes Deployments
How to Map Your Deployment Pipeline
CI/CD Best Practices for Stress Free Software Development
The Importance of Continuous Deployment
10 Pillars of Pragmatic Kubernetes Deployments
Conquer SaaS Chaos with a SaaS DevOps Platform
Buyers Guide to Workload Protection
Protecting the SDLC
Join the 80% – DevOps for SAP: Laying the Foundations for Success
Streamlining Software Development with SAP Toolchain Integration
How to Get Started with DevOps for SAP
A Practical Guide to DevOps for SAP
Best Practices for GitHub
Buyers Guide for CNAPP
END_OF_DOCUMENT_TOKEN_TO_BE_REPLACED