Monoliths and microservices are 2 approaches to building software. Which one you choose can significantly impact development and performance.

In this post, I discuss:
■ The difference between monoliths and microservices
■ Which is better for enterprise software applications
■ Challenges of both approaches

What Are Monoliths and Microservices?

A monolith is a singular executable software application. It contains one codebase that defines the user interface, application logic, and database required to run an application. A monolithic application is built and maintained as a single, indivisible unit and is served from a central location. For example, in-house accounting software that uses a database to store customer records, a web server for record keeping, and other components, all served from an on-premises server.

By contrast, a microservice architecture breaks down an application into smaller independent units. Microservices are connected to make the whole application through Application Programming Interfaces (APIs).

Microservices are modularized. Their components are built independently and only become associated when they need to create an application. A database component built for a microservice can be part of 2 different software applications through software reuse.

The diagram below visualizes the differences between monoliths and microservices. They key dinstinction is that monoliths are large units with several services whereas an application using microservices is made up of several independent microservices. 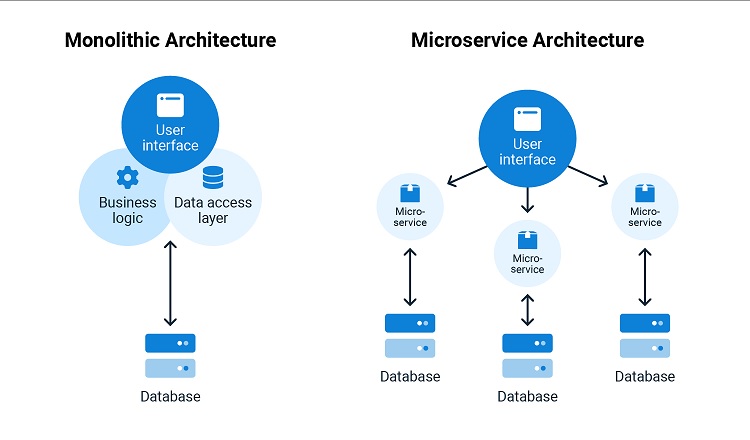 Which One Is Better for Enterprise Software Applications?

Traditionally, software applications were built as monoliths. With the advancement of cloud technologies, though, particularly containerization, microservices have become popular in delivering software. Google Trends shows that microservices gained popularity after 2013. It was also 2013 when Docker, the leading containerization technology, was released.

A container is a lightweight, portable computing environment with all the necessary files to run independently. Containerization is the process of making an application runnable as a container. Containerization helped microservices gain popularity and widespread adoption through scaling. Microservice applications leverage cloud orchestration tools like Kubernetes to schedule and scale workloads.

Imagine an application contains a database and a web front-end, but the database is also serving a second application. A Kubernetes node dynamically manages load for the front-end and database by increasing or decreasing load on each service. The Kubernetes node services 2 applications, and only uses the resources required for the task. A monolith can only scale by adding more nodes that scale the entire application, creating unnecessary costs.

Enterprise software applications operate at scale and compete with other products for market share. Our post on DORA metrics discusses how agility-based metrics like deployment frequency, lead time, mean time to recovery (MTTR) and change failure percentage are important to improving profitability, market share, and productivity. Microservices are more agile and flexible than monoliths, allowing microservice applications to be delivered faster to market and achieving cost savings at scale. Microservices can be delivered iteratively with feedback instead of delivering a monolith as a single executable. The benefits of microservices make them well-suited for enterprise software applications.

The Challenges When Using Microservices

Both the monolithic and microservice architecture can be complicated. When developing a monolith, you end up with a large application code base. It's unlikely that a single developer or team understands the application in its entirety.

Terence Wong is a Technical Content Creator at Octopus Deploy 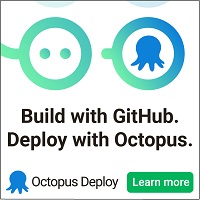 Security at the Speed of Development
Accelerate Your Kubernetes Deployments
How to Map Your Deployment Pipeline
CI/CD Best Practices for Stress Free Software Development
The Importance of Continuous Deployment
10 Pillars of Pragmatic Kubernetes Deployments
Conquer SaaS Chaos with a SaaS DevOps Platform
Buyers Guide to Workload Protection
Protecting the SDLC
Join the 80% – DevOps for SAP: Laying the Foundations for Success
Streamlining Software Development with SAP Toolchain Integration
How to Get Started with DevOps for SAP
A Practical Guide to DevOps for SAP
Best Practices for GitHub
Buyers Guide for CNAPP
END_OF_DOCUMENT_TOKEN_TO_BE_REPLACED