"DevOps" may not appear on most enterprises' organizational charts, yet it's having a significant impact on the design of their IT architectures, driving the rise of the low code development, and permanently re-shaping the roles and responsibilities of IT organizations.

Those are the key findings of ServiceNow's The 2016 Cloud Computing Tipping Point report , which reveals that a majority of enterprises are now "cloud-first."

Surprisingly, most respondents credit DevOps, not their IT organizations, for guiding them through this transition. That presents a new set of challenges and opportunities for those IT organizations.

The Rise of DevOps

DevOps was born out the common frustration among enterprise IT systems users because most application development today remains in a long, traditional cycle that requires professional developers. The need to fix issues quickly and make systems more available to the users has also necessitated the need for development and operations teams to work very closely.

Although rapid enterprise app development can help organizations quickly innovate and automate, saving time and cycles, it can take months to complete a project. IT teams are sitting on a growing backlog of projects that they just can't get to. At the same time, the Operations team is trying to fix the issues that came out of the code that was thrown over the fence. By collaborating and working together as a single team many organizations like Netflix and Google are able to deploy their code tens or even hundreds of times a day.

DevOps is revolutionizing the development process due to the ability of cloud computing that can solve many of these issues more efficiently and across the enterprise. Technology is getting more accessible; average business people can now not only use technology but create it themselves.

Increasing the development cadence puts pressure on how enterprises deploy new applications. DevOps shines a spotlight on the bottlenecks incurred when hosting apps on company‑owned infrastructure. Cloud is the way to rapidly add new streams of revenue‑driving apps to fuel business growth. Along with that automation of the development process from build to test to deploy makes DevOps a better return on investment for organizations.

So perhaps the survey's discovery of the rapid rise of DevOps should not be surprising after all, especially considering how enterprises are embracing the movement:

■ 94 percent reported that they are involved in some way with the DevOps movement, a philosophy with origins in the agile development community

The survey also found that the DevOps movement is marginalizing IT organizations that resist or try to ignore, the fact that enterprises have reached the data computing cloud-first tipping point:

■ 88 percent feel the cloud could replace their IT departments, at least on a part-time basis

Those findings sound ominous, yet they highlight the reasons why IT should embrace the opportunities DevOps is driving. As organizations continue down the cloud-first path, they will rely on their IT departments more than ever:

■ Furthermore, 68 percent said IT will be completely essential in the future 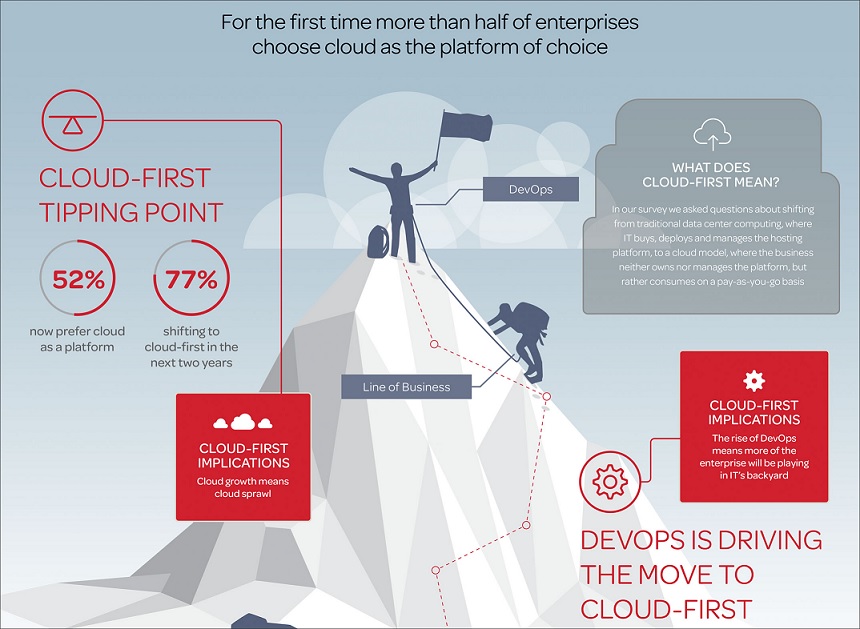 A cloud-first world will increase the number of cloud projects deployed. Since DevOps plays such a key role, most will initiate from the bottom-up, and deploy at a much more rapid pace. Improving the speed of application delivery and turning around updates is not a luxury, it's a business necessity.

This represents a radical change for the typical IT organization that has traditionally exercised a great deal of control over the computing environment to achieve the goals entrusted to them by the enterprise such as security, compliance, performance and reliability. Today, IT must develop new strategies to give control to line of business users to achieve those goals through access to develop. This approach facilitates low code development.

Of course, in years past, permitting users to develop their apps was not a viable option. The high risks associated with assigning them the necessary administrative privileges was too high. That led to the rise of the Shadow IT trend, with users implementing third party solutions without IT's permission or knowledge.

But now, instead of being a roadblock to the DevOps movement, IT has the opportunity to lead a delegated development program that permits the organization-wide adoption of cloud-based low-code development platforms. Yet, that program cannot succeed unless IT has a way to maintain control of the platform, data and overall governance. This requires a platform, templates and tools that have business logic built in, a user interface that is intuitive, even delightful, to use, and guardrails to maintain the organization's security posture.

With those pieces in place, IT maintains control of on-premises and cloud-based systems, and simultaneously helps the line of business to move at the speed of business with their specific application requirements. IT transforms from its old role of data center caretaker to an internal service provider that enables innovation throughout an organization. This is what will continue to drive digital transformation and business success.

Allan Leinwand is CTO at ServiceNow.

Weaveworks announced the acquisition of Magalix.

DataOps.live and Okera, the Universal Data Authorization company, announced a strategic partnership to increase the speed and security of sensitive data workloads running on the Snowflake Data Cloud Platform.

Improving Customer Experience with End-to-End Application Monitoring
Accelerate Your Serverless Journey with Splunk and AWS
Splunk .conf21 Virtual
How to Get Started with OpenTelemetry
5 Rs: Which Strategy Is Right For Your Application Modernization & Migration to Google Cloud?
How to Use Digital Experience Monitoring to Improve Core Web Vitals
The State of Observability 2021
Isolating Issues and Improving User-Experience Across Your Full Stack
SplunkLive! Americas
A Beginner's Guide to Agile Development for SAP
Splunk Momentum: Infrastructure
How Splunk uses Splunk Observability to Monitor Cloud Apps
Scaling Kubernetes with Splunk and AWS
12 Immutable Rules for Observability
Accelerate the Move to SAP S/4 with DevOps Automation
END_OF_DOCUMENT_TOKEN_TO_BE_REPLACED

Splunk IT and Observability Predictions 2022
Splunk Executive and Emerging Technology Predictions 2022
APIs in Action
How to Optimize Digital Experience with Service-Level Objectives
The State of Observability 2021
The 5 Foundational DevOps Practices
Infrastructure Monitoring 101: The Power to Predict and Prevent
Get Your Cloud & Hybrid Migration Strategy Right in Government
AI and Machine Learning in Your Organization
APIs in Action: A Guide to Monitoring APIs for Performance
Making Sense of Digital Experience Monitoring Solutions
A Practical Guide to DevOps for SAP
Splunk Predictions 2021: Executive Report
Fast-Track Your Multicloud Monitoring Initiative
The Essential Guide to Container Monitoring
END_OF_DOCUMENT_TOKEN_TO_BE_REPLACED