Skip to main content
Challenges of Cloud Native Infrastructure
May 09, 2019

Nearly 50 percent of survey respondents cited a lack of skills as the top challenge their organizations face in adopting cloud native infrastructures.

Other key findings include:

■ 40 percent of respondents use a hybrid cloud architecture. The hybrid approach can accommodate data that can’t be on a public cloud and can serve as an interim architecture for organizations migrating to a cloud native architecture.

■ 48 percent of respondents rely on a multi-cloud strategy that involves two or more vendors. This helps organizations avoid lock-in to any one cloud provider and provides access to proprietary features that each of the major cloud vendors provide. 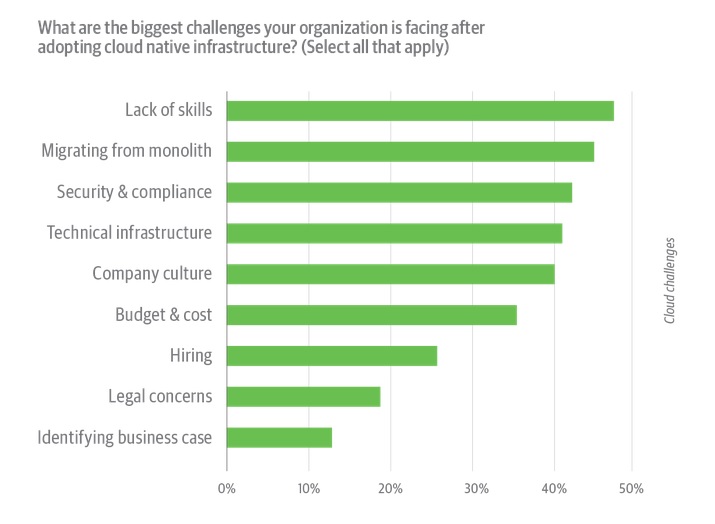 “With today’s ever-changing technology advancements, there is a fundamental movement to adopt a cloud native infrastructure,” said Roger Magoulas, VP of O’Reilly Radar. “Companies are rising to the occasion and meeting the increasing demands of users and customers, but it’s important to remember that true cloud native success takes time. Start small and focus on the shift of services gradually, while investing in the transition. As the cloud native market continues to develop, we expect to see many opportunities for tools and training to help ease the transition to new architectures and to bridge the cloud native skills gap.”

Methodology: O’Reilly surveyed 590 practitioners, managers and CxOs from across the globe for this report.

Neosec formed a strategic partnership with Kong Inc. to integrate its API security platform with Kong Gateway to provide a complete enterprise-class solution for managing and securing APIs and microservices.

Accelerate Your Serverless Journey with Splunk and AWS
Splunk .conf21 Virtual
How to Get Started with OpenTelemetry
5 Rs: Which Strategy Is Right For Your Application Modernization & Migration to Google Cloud?
How to Use Digital Experience Monitoring to Improve Core Web Vitals
The State of Observability 2021
Isolating Issues and Improving User-Experience Across Your Full Stack
SplunkLive! Americas
A Beginner's Guide to Agile Development for SAP
Splunk Momentum: Infrastructure
How Splunk uses Splunk Observability to Monitor Cloud Apps
Scaling Kubernetes with Splunk and AWS
12 Immutable Rules for Observability
Accelerate the Move to SAP S/4 with DevOps Automation
A Guide to DevOps Tool Chain Integration in SAP
END_OF_DOCUMENT_TOKEN_TO_BE_REPLACED

APIs in Action
How to Optimize Digital Experience with Service-Level Objectives
The State of Observability 2021
The 5 Foundational DevOps Practices
Infrastructure Monitoring 101: The Power to Predict and Prevent
Get Your Cloud & Hybrid Migration Strategy Right in Government
AI and Machine Learning in Your Organization
APIs in Action: A Guide to Monitoring APIs for Performance
Making Sense of Digital Experience Monitoring Solutions
A Practical Guide to DevOps for SAP
Splunk Predictions 2021: Executive Report
Fast-Track Your Multicloud Monitoring Initiative
The Essential Guide to Container Monitoring
The Data Age Is Here. Are You Ready?
END_OF_DOCUMENT_TOKEN_TO_BE_REPLACED