Survey respondents with mature DevOps practices were 338% more likely to integrate automated security than organizations with no DevOps practice, according to The 2018 DevSecOps Community Survey from Sonatype. 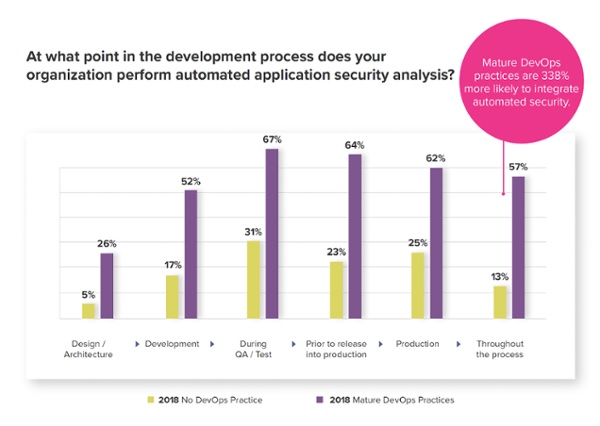 After another record year of breaches, analysis of responses found that 3 in 10 organizations suspected or verified breaches stemming from vulnerabilities in open source components — a 55% increase over 2017, and 121% increase since 2014. 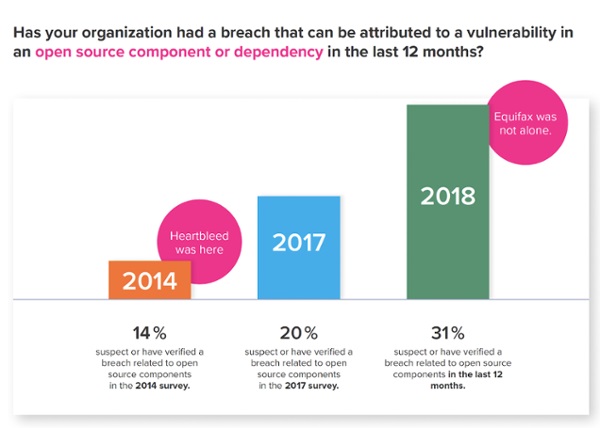 This year’s survey also found that investments in open source governance (44%), container security (56%), and web application firewalls (58%) were noted as the most critical to organizations pursuing DevSecOps transformations.

"The appeal of using one technology that’s free rather than buying a licenced, chargeable piece of software is apparent. But so are the risks. It is concerning that some developers are simply ignoring the policies crafted and communicated for their organizations, likely for the sake of speed and costs," said Helen Beal, DevOpsologist at Ranger4.

“As application breaches tied to open source components jumped more than 50% year over year, those investing in DevSecOps showed 85% higher levels of cyber readiness, compared to those who aren’t,” said Wayne Jackson, CEO of Sonatype. “It’s evident that recent high profile breaches have heightened investments in DevSecOps. The survey also revealed strong investments from organizations striving to stay ahead of May 2018’s ‘secure by design’ requirement stipulated within the EU’s General Data Protection Regulation (GDPR)”.

Other key findings from the survey include:

■ 77% of mature DevOps organizations have open source policies in place, with a 76% adherence rate. Conversely, only 58% of respondents without mature DevOps practices had a policy with a 54% adherence rate — revealing that adding automated governance to DevSecOps is difficult to ignore.

■ 59% of mature DevOps organizations are building more security automation into their development process as attention toward GDPR compliance grows.

■ 63% of respondents with mature DevOps practices say they leverage security products to identify vulnerabilities in containers, as these components become more ubiquitous in modern IT landscapes.

■ 48% of respondents admitted that Developers know application security is important, but they don’t have the time to spend on it, shedding light on the growth in automated security investments.

About the Survey: The 2018 DevSecOps Community Survey provides visibility into the attitudes of software professionals toward DevOps best practices and the changing role of application security. The survey was conducted by Sonatype, Carnegie Mellon’s Software Engineering Institute, Contino, DZone, Ranger4, SJ Technologies, and Signal Sciences. The survey’s margin of error is ±2.02 percentage points for 2,076 IT professionals at the 95% confidence level.

How to Successfully Incorporate Observability Into Your Cloud Migration Strategy
Operationalizing Digital Experience with Synthetic Monitoring
How to Get Started with DevOps for SAP - a 10-Step Guide
Splunk IT + Observability Predictions for 2022
Splunk Executive Predictions 2022
Improving Customer Experience with End-to-End Application Monitoring
Accelerate Your Serverless Journey with Splunk and AWS
Splunk .conf21 Virtual
How to Get Started with OpenTelemetry
5 Rs: Which Strategy Is Right For Your Application Modernization & Migration to Google Cloud?
How to Use Digital Experience Monitoring to Improve Core Web Vitals
The State of Observability 2021
Isolating Issues and Improving User-Experience Across Your Full Stack
SplunkLive! Americas
A Beginner's Guide to Agile Development for SAP
END_OF_DOCUMENT_TOKEN_TO_BE_REPLACED

The State of Observability 2022
Build SAP into Wider DevOps Pipelines
A Beginner's Guide to Observability
Splunk IT and Observability Predictions 2022
Splunk Executive and Emerging Technology Predictions 2022
APIs in Action
How to Optimize Digital Experience with Service-Level Objectives
The State of Observability 2021
The 5 Foundational DevOps Practices
Infrastructure Monitoring 101: The Power to Predict and Prevent
Get Your Cloud & Hybrid Migration Strategy Right in Government
AI and Machine Learning in Your Organization
APIs in Action: A Guide to Monitoring APIs for Performance
Making Sense of Digital Experience Monitoring Solutions
A Practical Guide to DevOps for SAP
END_OF_DOCUMENT_TOKEN_TO_BE_REPLACED