The average multinational spends several million dollars a year on compliance, while in highly regulated industries — like financial services and defense — the costs can be in the tens or even hundreds of millions. Despite conducting these rigorous assessments yet we wake up to data breach announcements on an hourly basis.

If you’ve been following the trends around modern application development, you’ve likely been inundated with reasons why you need to adopt microservices. Writing software in this manner places the application as the source of essential complexity, resulting in the accidental complexity of the application’s data model, a common side effect of software development.

Employees, too, often resent compliance programs, seeing them as a series of box-checking routines and time-consuming exercises. In our view, all this expense and frustration is tragic — and avoidable. The answer, we believe, lies in better measurement.

Governance standards and guidance for secure programming call for sensitive data to be redacted/obfuscated in applications prior to being persisted, operated upon and dispatched on secure communication channels.

An attacker might be able to observe or provoke a system into “leaking” or revealing secret data, such as cryptographic keys, the plaintext of passwords and so on. A well-documented example is where an intruder manages to read the operating system page file or a core dump of a running (or deliberately terminated) process in order to gain access to sensitive data.

Several coding standards and guidance documents exist that call for sensitive data to be redacted when dispatched to a logging provider or third party value-added SaaS services but offer little advice on how this is to be achieved or verified, especially given the complexity of programming languages and hardware.

Why is Tracking Sensitive Data a Hard Problem?

Redacting sensitive data might seem simple at first: just overwrite the most or least significant bits of data with zeros or XXXs and carry on, right? A less trivial analysis reveals important questions, including:

■ How do we define “sensitive”? What objects in the program are “sensitive” and how are they identified?

■ Imagine that we have two variables X and Y which are defined to be “sensitive.” We then declare and initialize another local variable Z with an initial value derived from some function that combines X and Y.

■ Is Z “sensitive”? Does Z need to be redacted/obfuscated?

■ Exactly when should redaction/obfuscation be performed, relating to the scope and lifetime of data objects which is, in turn, intricately entwined with a particular programming language’s model (functional, object-oriented) of how data should be organized and (de-)allocated?

■ How can we regulate the flow of sensitive data and its derivatives throughout the scope of the running application? Can sensitive and regulated data be sent to 3rd party analytics services to measure DAUs and MAUs without consent of consumer who owns her/his data?

■ How do we verify that redaction/obfuscation really has been performed correctly, to the satisfaction of ourselves, our customers, and regulators?

The Various Shapes of Data

Data originates when consumers subscribe to interact with value-added services. When a consumer registers or signs in to the service, data objects are created to represent the customer persona. The lifetime of these objects is restricted to the scope of the customer session. A typical customer session triggers various functional flows to serve his or her needs, leading to the creation of many communication paths, both within the core application and across its boundary to other SaaS applications.

Within the scope of these flows, data elements are initialized, referenced, copied, transformed, persisted, sent to other SaaS channels and eventually de-scoped.

First and foremost, it is important to classify these data elements based on degrees of sensitivity. Thereafter, the data element in focus must be observed in the context of its participation in flows, both within and outside the boundaries of the application.

There is no “sensitive” control-switch to alleviate such concerns, or if there is it requires onerous researching to enable the precise option. With the lack of accessible solutions, operations staff deploying cloud-based services can only harden the host surface (with trust-some or trust-none policies), passively sniff for patterns produced by actions in applications and define escalation workflows.

For an instrument to be effective, it would need to

■ have the ability to classify these detected types as sensitive based on a supervised model using natural language processing that is trained upon a corpus of compliance mandates.

■ track all transformations, lineage, and provenance of such sensitive types. 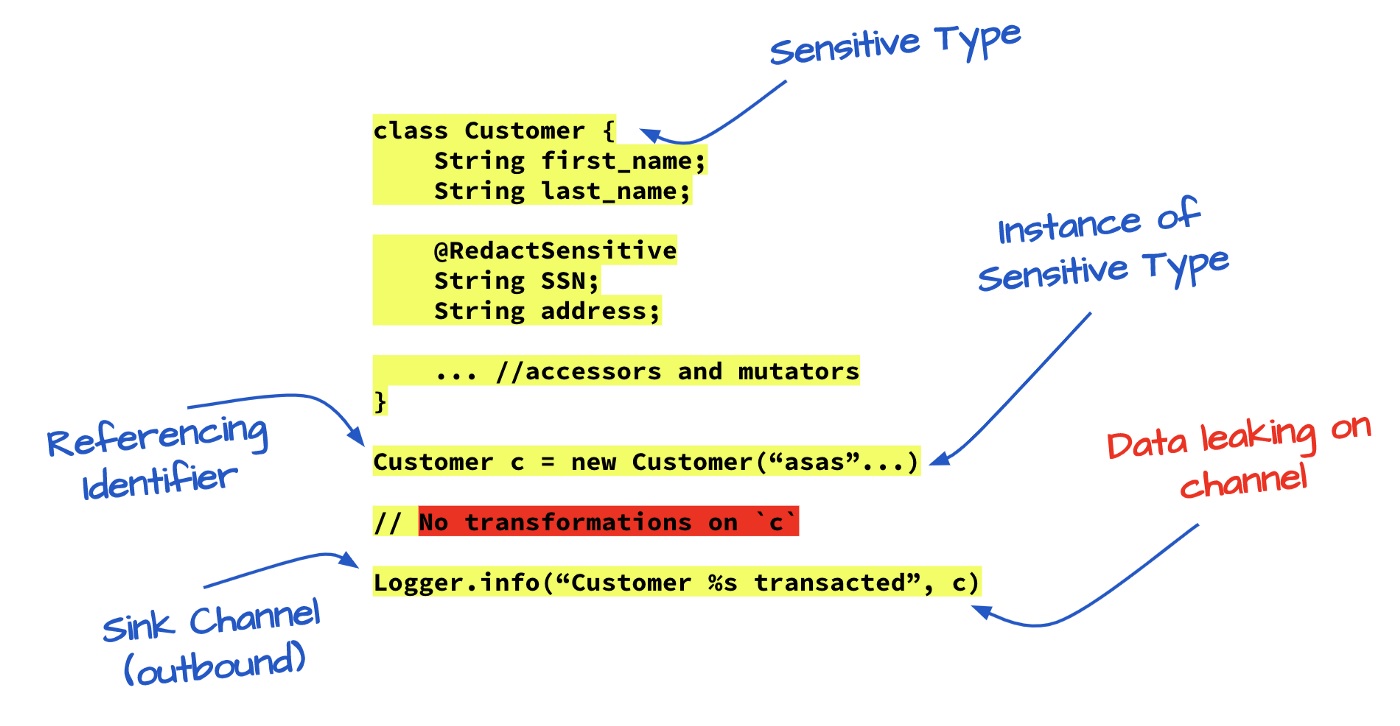 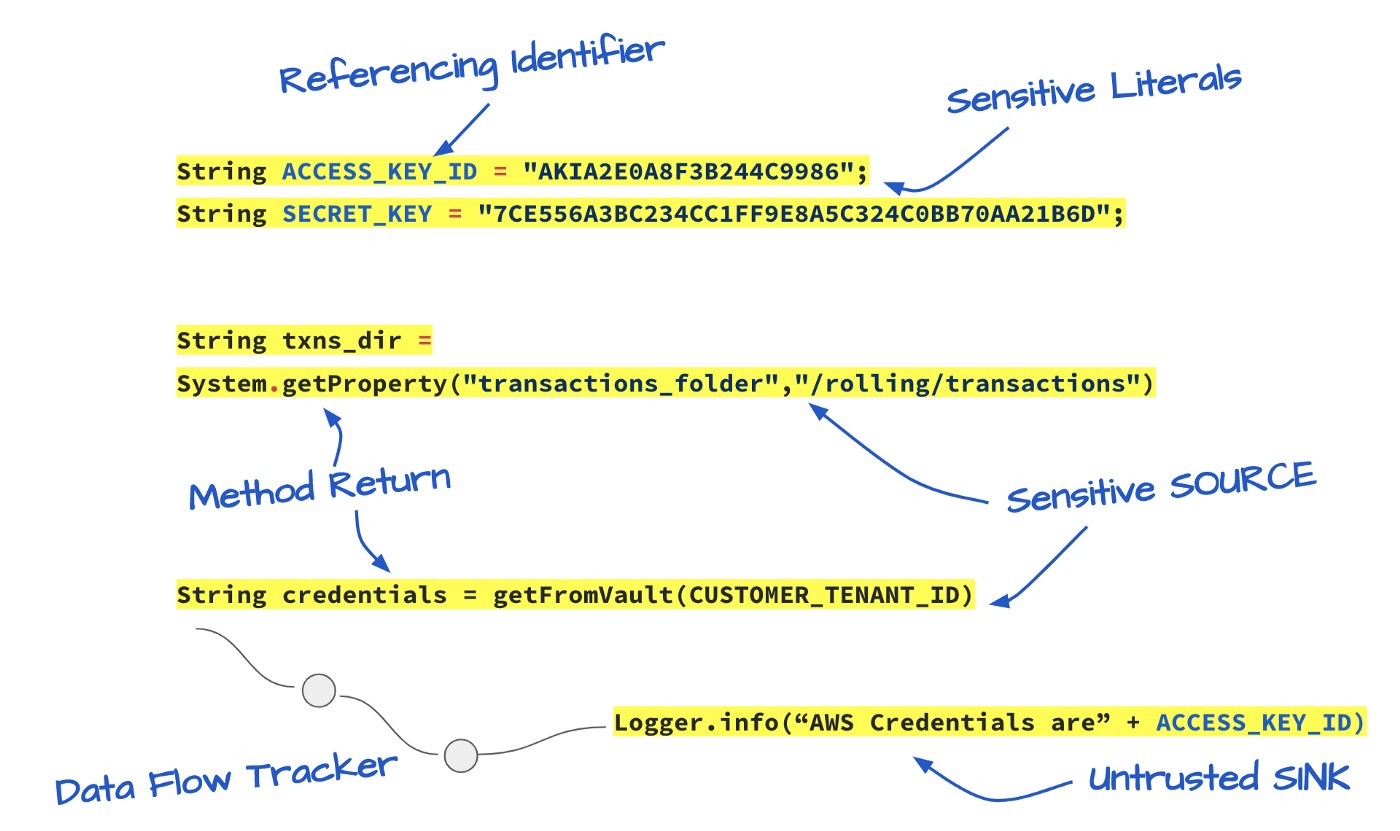 So how do we create models that can credibly evaluate the impact of a data-driven compliance program?

Let’s start by understanding Data and Behavior — What the Application Knows and What It Can Do.

We model communication with the outside world via interfaces. An interface is an abstraction that describes a device that is used to exchange data with a communication partner. Interfaces may be network connections, files or other programs reachable via IPC/RPC mechanisms. In this regard, an interface is similar to the UNIX concept of a file. We assume that each interface is represented as an object in the code, for example, a file-descriptor variable or a variable representing an input/output stream. We refer to this variable as the interface descriptor (analogous to the UNIX file descriptor).

Thereafter the system should be able to identify the following operations on interfaces:

■ Read operations — A program obtaining information from the outside world by invoking a read library function to which the interface descriptor is passed.

■ Write operations — The termination point (or endpoint) of an ordered data flow.

Taking a code-as-data approach we should be able to deterministically quantify both data and behavior in a binding context.

How to Get Started with DevOps for SAP - a 10-Step Guide
A Beginner's Guide to Agile Development for SAP
Accelerate the Move to SAP S/4 with DevOps Automation
A Guide to DevOps Tool Chain Integration in SAP
A Step-by-Step Guide to CI/CD Workflows in SAP
What is DevOps for SAP (and why should you care)?
END_OF_DOCUMENT_TOKEN_TO_BE_REPLACED